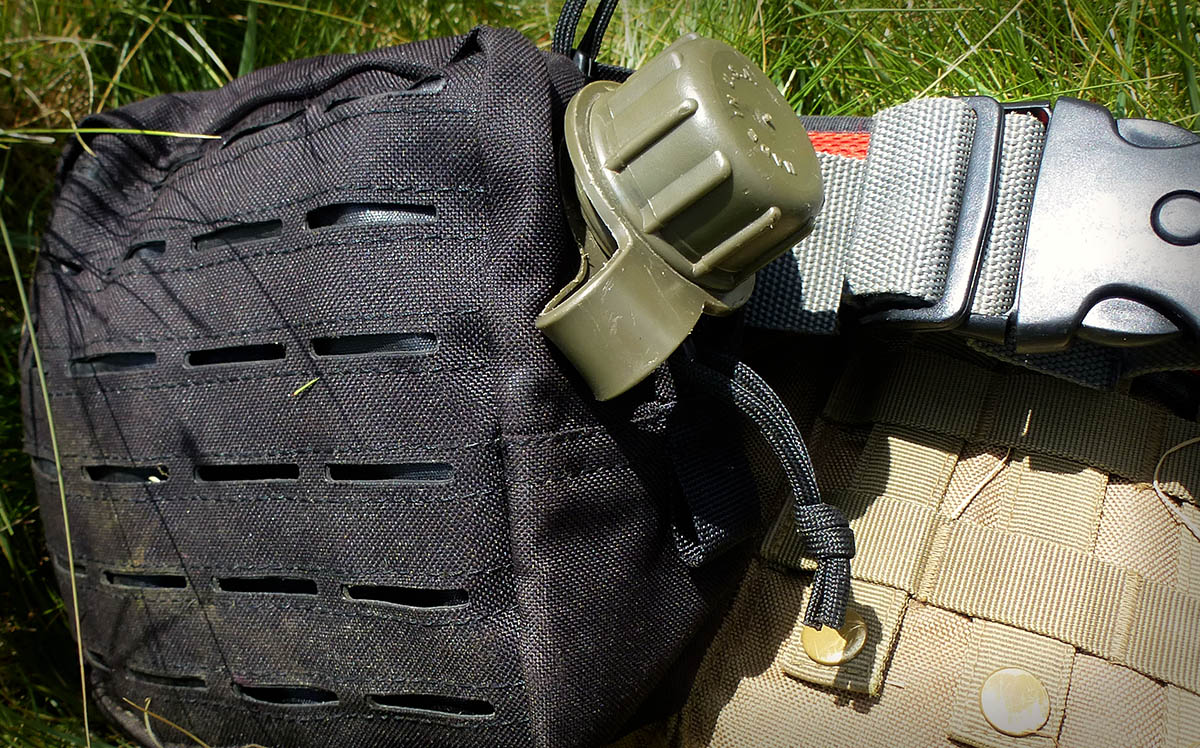 This review will be most relevant to those who prefer climbing or military "patrol" packs that forego large padded hipbelts and instead sit high on the back and leave space at the waist for a harness or padded belt. We've outlined in other reviews the reasoning behind this "pack + belt" approach and for those interested we recommend reading our pack and belt bag reviews.

As always, we're looking at both the standard issue US GI 1 Quart Bottle and the Bulldog Tactical Gear Laser MOLLE Utility Pouch from the point of view of long distance trekking over tough terrain.

At Scramble, when it comes to carrying kit, we recommend something of a modular approach with a distinct division of labour between what is carried on the shoulder and what is carried on the hip. By using a pack like KarrimorSF's Predator 30 (which is basically a climbing pack decorated with MOLLE to make it useful to military types) that sits quite high on the back with a minimal (more waist than hip) belt, some handy real-estate is made available. A climber would use this space for a harness and all their gear, we use it for a padded belt onto which we can attach a good amount of kit we want to hand but don't want weighing on our shoulders (camera, hats, gloves, knives, head-torches etc ...).

One of the items we always want to hand is a water bottle. Water's heavy, so it makes a good deal of sense to get all that weight off the shoulders and onto the hip and to do that we need a way to attach a bottle to our padded belt; enter the second item in this review Bulldog Tactical's Laser MOLLE Medium Upright Utility Pouch.

Bottle: The US GI 1 Quart Canteen 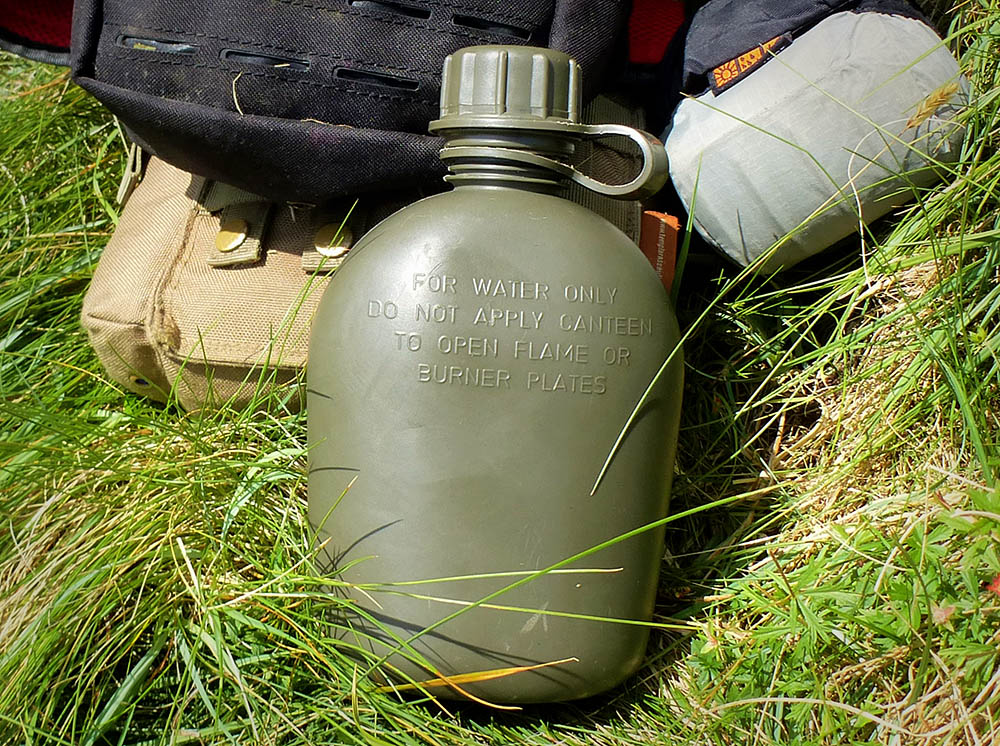 The US GI 1 Quart Canteen

There's a lot or water bottles out there, few are as robust as the US GI canteen. Yet, though it's tough as nails, made with a thick-walled BPA free plastic, it's not that heavy when compared to the competition.

The design has been around in one form or another for many, many years and for good reason - it works. The canteen shape is far more stable than regular circular-base water bottles; its wide oval base and overall solidity allow it to be refilled via a water filter like the Sawyer Mini without falling over. The GI canteen is very ergonomic; easy to hold and easy to sip or glug from with an opening that is neither overly broad nor frustratingly  narrow. 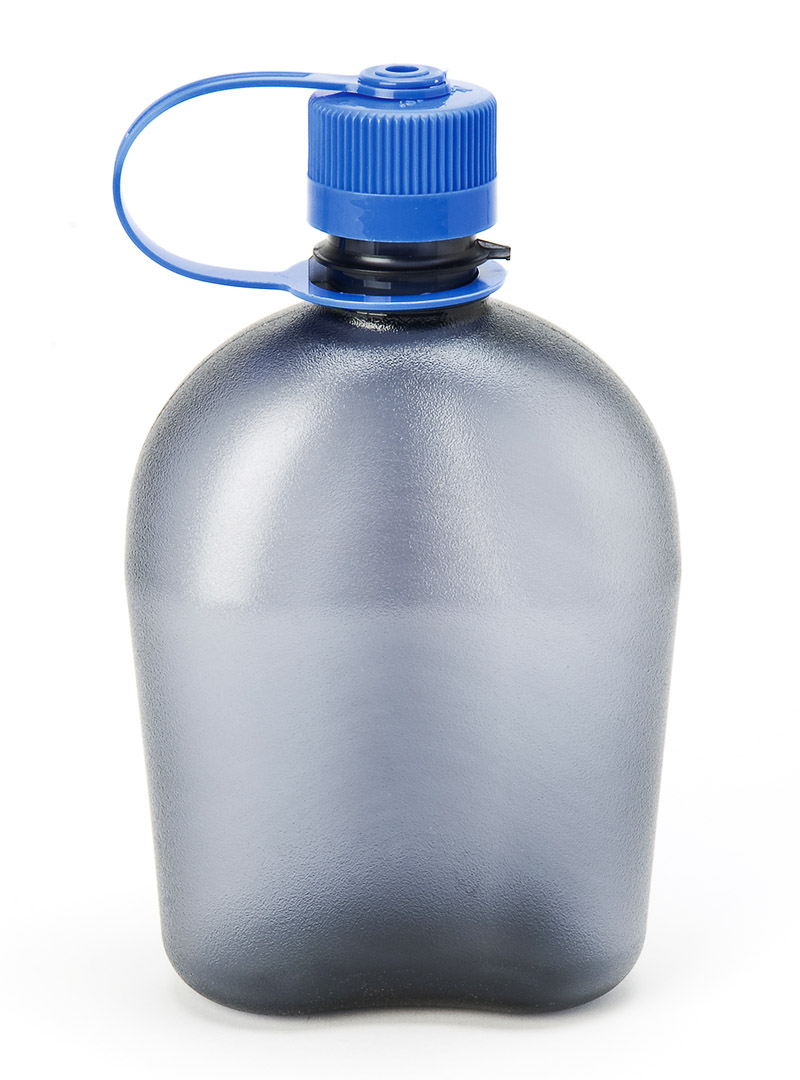 The popular brand Nalgene clearly realised that it would be hard to better the design, so they just straight up copied it; or as they put it: "The old camping canteen had some work done – and we’re the plastic surgeon".

Aside from giving it a funky name, the "Oasis", they made one meaningful improvement - you can see through their version and that is handy when you want to ration your water. However, instead of a heavy duty plastic, they used Tritan, a copolyester plastic; the Nalgene Oasis is much thinner and unlike the military version, can be easily squeezed. Some of the Scramble team have reported these bottles are not nearly as robust and a few have had theirs fail (after drops and falls).

Compared to the far more robust GI canteen the Nalgene Oasis is just 4g lighter. Personally, I've never had a problem knowing how much water I've got left, aside from the weight, a little shake and you have a pretty good idea.

I've taken tumbles while scrambling over loose scree, been blown off my feet crossing peaks in gale force winds, I've stumbled and fallen while meandering over prehistoric clumpy bogs and I've fallen while climbing a crumbling volcano - it happens when you're not on a trail. I don't always land on my water bottle, but it does get battered, and though it's a bit scratched I get the impression I'll fail before it does. I don't have anywhere near that confidence in most of the water bottles on the market. There's plenty of things that can go wrong when out for days and weeks on end, it seems sensible to not add your water bottle to the list of possible failures, especially when the gram savings are so minimal.

Firstly, and here I'm speaking personally (not for Scramble as a whole) I'm a little wary with regard to aluminium when it comes to food and water. The jury is still out on aluminium as a neurotoxin - my guess is it is -  until I have evidence it's absolutely not, I'm abstaining.

Stainless steel canteens, as long as they're not too heavy can seem appealing, but their problem lies in their thermal conductivity. In sub zero conditions, a) your wet lips will probably get stuck to the freezing cold steel, and b) your cold water will get a deep chill inside a steel bottle. In hot weather, the inverse is true and the steel will heat your water, which is not ideal when you want to cool down and be refreshed. Their only real benefit is you can boil water in them directly.

The canteen shape is ideal for its stability and ergonomics. Plastic is a poor conductor of heat, is relatively light and thick-walled plastic is very strong. One of the beauties of the military, not being interested in fashion and marketing, when they get something right they stick with it. The US GI 1 Quart Canteen is absolutely right and until someone comes up with valid, material improvements, Scramble are sticking with it.

Having settled on the water bottle, we need a strong belt bag / holster to house it. One of the nice things about the canteen design is that for its capacity it's quite squat and shallow. This low profile makes it ideal for a belt bag setup.

Before we continue, a quick word on Bulldog Tactical and a reiteration from a past review:

The difference between UK made, military grade items and their cheapo look-a-like counterparts is stark, and easily discernible once held in the hand. Companies like Templar Assault Systems, Bulldog Tactical Gear, British Tactical, KarrimorSF (not Karrimor) et al make kit for the military, companies like Webtex, Viper and Kombat do not.

Bulldog Tactical Gear are a UK company and one of the few manufacturers that employ laser cut MOLLE, this process allows them to make fully functional MOLLE pouches without the weight premium. Their Laser MOLLE Medium Upright Utility Pouch (we'll refer to it as the Upright Utility Pouch from hereon) is made from 600D nylon and weighs in at a very reasonable 146g. 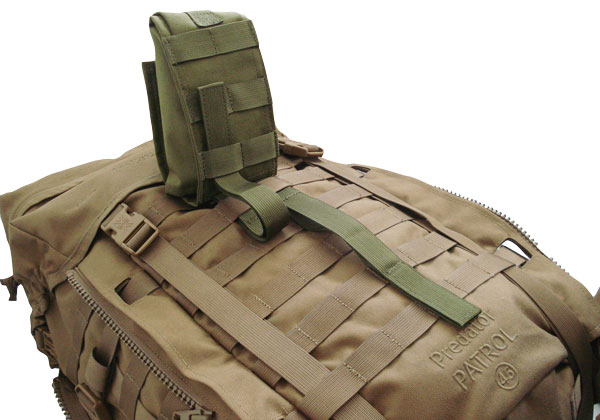 Being a MOLLE pouch means that it can be attached to any MOLLE compatible system (like the KarrimorSF pictured right), but for this review, we're specifically interested in this item as a belt bag.

Bulldog Tactical's Upright Utility Pouch is perfectly proportioned to accomodate the US GI 1 quart canteen. Being a square cuboid 16cm tall and wide (thus 22.6cm along the diagonal) and having a depth of 8cm means that when laid on the diagonal, the 20cm tall canteen will fit snugly inside the zipped up pouch. However, unless I'm doing some scary manueuvres, I'll generally have it with the lid poking out the front top corner (as pictured below left), pointing forward, with the zip pulled up. That's pretty secure and I've not had any issues with it coming loose.

Aside from the laser cut MOLLE on the front, there's not a great deal going on with this pouch. There's a drainage hole at its base (pictured below right), and two good quality zips that run from about half way up on each side.

At the back of the pouch are two MOLLE loops which can accomodate a 3" (8cm) wide padded belt, like the C.K. Magma pictured below. 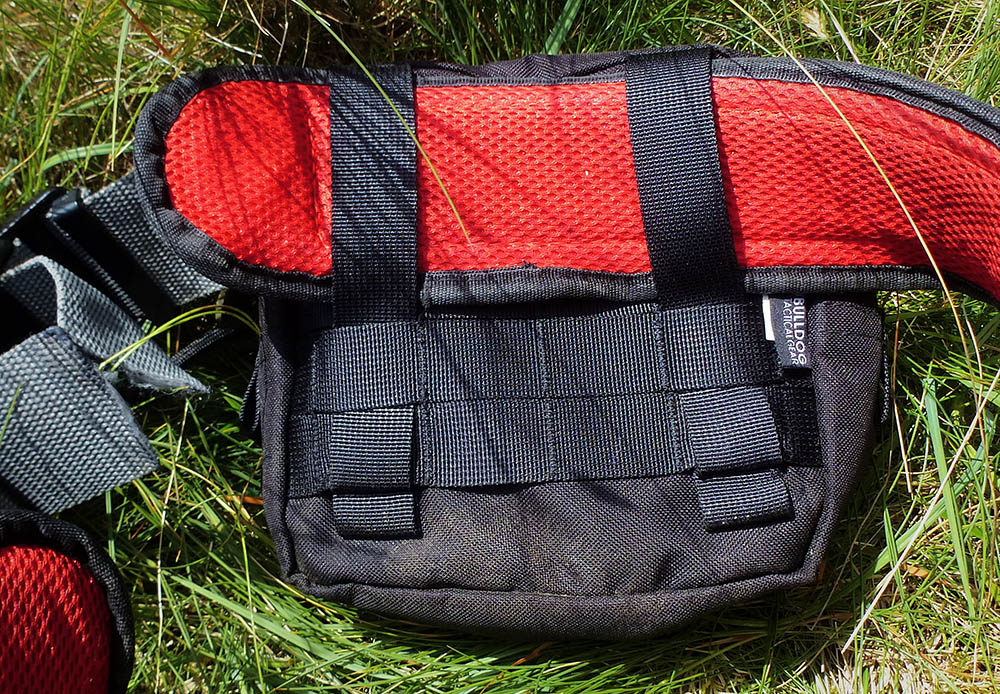 There are other pouches out there specifically for these types of canteen, but ...

The Bulldog Tactical Upright Utility Pouch is a very tough, low profile and lightweight MOLLE pouch that is highly suited for a belt system. Ideally proportioned to house the US GI canteen either with the lid section exposed or, when you need to completely secure it, with the pouch fully zipped. Finally, there's enough room for a few energy bar style snacks.

It would be nice to be able to see exactly how much water you have left in your canteen and this is not possible with the US GI 1 quart bottle. On first use, these canteens can make the water taste a bit funny; five or so rinses are required, then you're good to go. They're a little heavier than some options, though not much, but in our view that's a minimal price to pay for its strength and durability.

The Bulldog Tactical pouch is the same story, it's not the lightest option out there, but it's build to last. A litre of water weighs 1 kg and each step, up and down the mountain, causes a jolt which results in a fair amount of stress on any fabric. So you need a secure fitting pouch which is strong enough to take that kind of pounding.

Aside from that there aren't any other negatives to report. These two items work very well together.

Bulldog Tactical Gear's Laser MOLLE Medium Upright Utility Pouch may as well have been made for the US GI 1 Quart canteen. Using a laser cut 600D nylon, this tough yet reasonably light, square cuboid MOLLE pouch can be securely attached to wide padded belts, allowing quick and easy access to your canteen with a little additional space for a few snacks. It comes in a range of exciting, fresh and vibrant colours: Coyote Tan, Olive Green, Black and Camo.

The US GI 1 Quart bottle is just a classic. Tough, stable, ergonomic and for its strength competitively light. Unlike many outdoor brands, when the military get something right they don't tend to tinker (and screw it up). If it ain't broke don't fix it, and there's nothing broke about the US GI 1 Quart canteen.

This combination is Scramble's top pick in the Water Bottle & Carry Pouch category.

This is a combined rating as both items are designed to work together.