[ * below we've bolded the relevant condition for the item reviewed here ]

Over time we've come across a number items that have really impressed us and we'd like to draw attention to, but ...

So for such items we've created "special mentions" (SM). These "reviews" don't get a rating score and may receive less in-depth coverage and don't feature in our catalogue, instead the SM write-ups fall somewhere between a post and a formal review. They are identified by a blue Scramble mountain logo.

Intros out of the way, we'll proceed with a look at Edelrid's "Canyoning Pack", the Lite Bag 30, and as always, we're looking at the item from the point of view of long distance trekking over tough terrain.

Introduction: Bumping Up The Range

The Edelrid Lite Bag 30 (we'll refer to it as the LB30 from hereon) is described as an ultralight canyoning pack with adjustable shoulder straps and a minimal pack size. It's a simple, top-loading day pack with a drawstring closure at the top and a drainage hole in the base and we've used them as food bags and return journey "carry-on / travel packs" for the past few years. 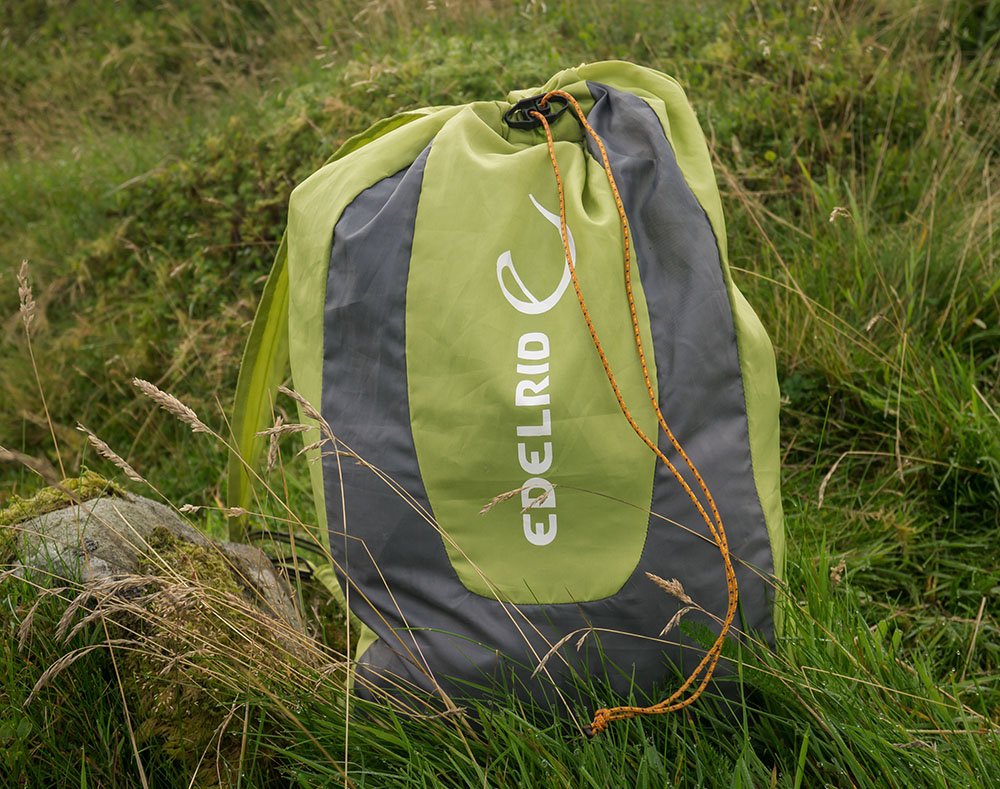 A previous Scramble favourite, the Sea To Summit 20L Ultra-Sil Pack was not able to hold 10+ days worth of food and so we tried out Edelrid's LB30. 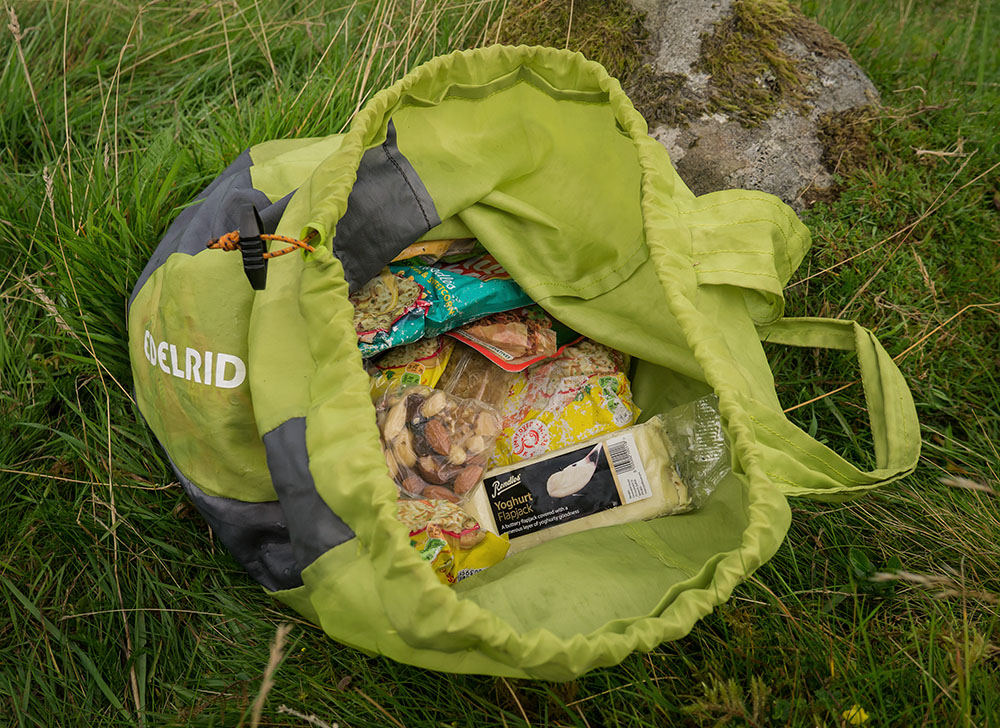 Edelrid, probably because they manufacture climbing ropes and harnesses, have an uncanny ability to make load-bearing kit that punches way above its weight and that's certainly the case here. The Edelrid LB30 is just as durable as the Sea To Summit pack, perhaps more so, and is lighter on a gram per cubic litre basis (the Edelrid at 100g = 3.3g per litre) versus the Sea To Summit 20L (at 3.5g per litre).

Just One Problem (and thus the "Minor Mod")

However, there was one weakness that the Edelrid had which prevented us from recommending it initially. The standard Edelrid LB30's drawstring cord stop, when under a heavy load (8 - 10 kg, perhaps beyond what Edelrid envisioned), wouldn't maintain its cinched closure and would drift open. This wasn't a problem for a food bag that would sit in ones pack, but for us to recommend it, it had to perform as a day pack also. The bottom line is that Edelrid should have stress tested it more aggressively and they would no doubt have come to a similar solution as ours.

A Minor Modification & Some Handy Additions

The problem is solved with the substitution of two components: the draw cord and the cord stopper. We use the following:

For anyone interested in using the LB30 as a day-pack we recommend a couple of additional items (or their equivalents) :

These two items (pictured above right) combine to make the Edelrid LB30 a comfortable, fully waterproof ultralight day pack weighing in around 200g in total (205g with Scramble's mod).

For active use (scrambling, speed hiking), we recommend an 8kg max load limit.

The LB30 is a simple top-loading pack with a cinch cord and stopper. As previously stated, we've replaced the cord and the stopper.  Obvously, if used as a day pack, a dry bag is an essential component. The benefit of this is that over-sizing the dry bag will create a minimum of 5L extra capacity. 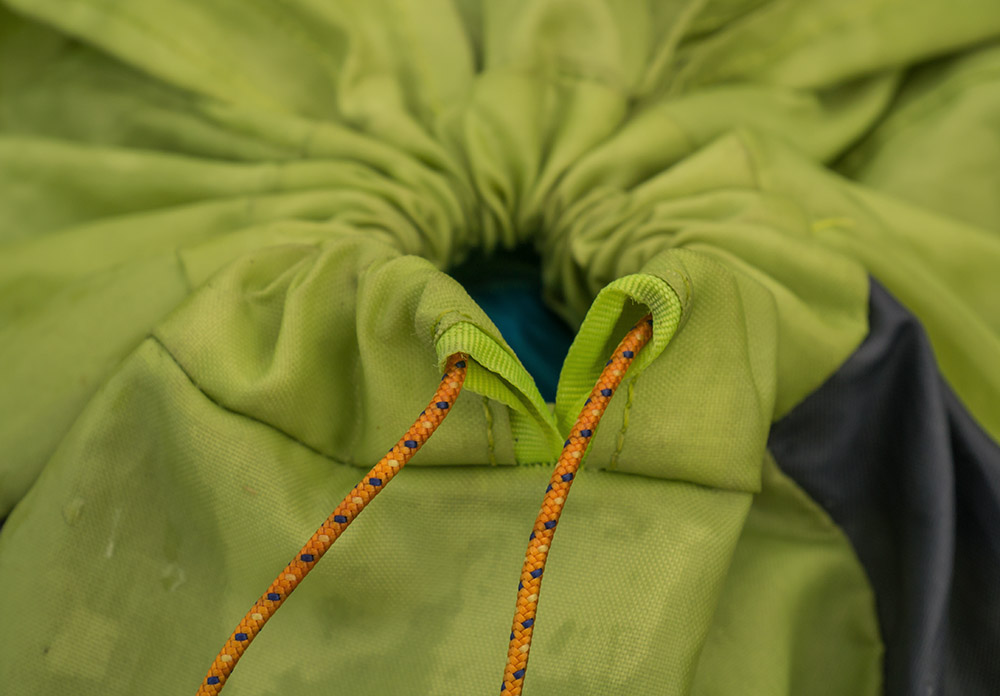 The LB30 has wider straps at the shoulder than many packs of a similar ilk. Bags this light generally forego padded straps and having a wider strap helps spread the load and reduces strain on the shoulders.

Each strap has a standard "lift to loosen, pull to tighten" adjuster.and the coarse webbing holds well under load. 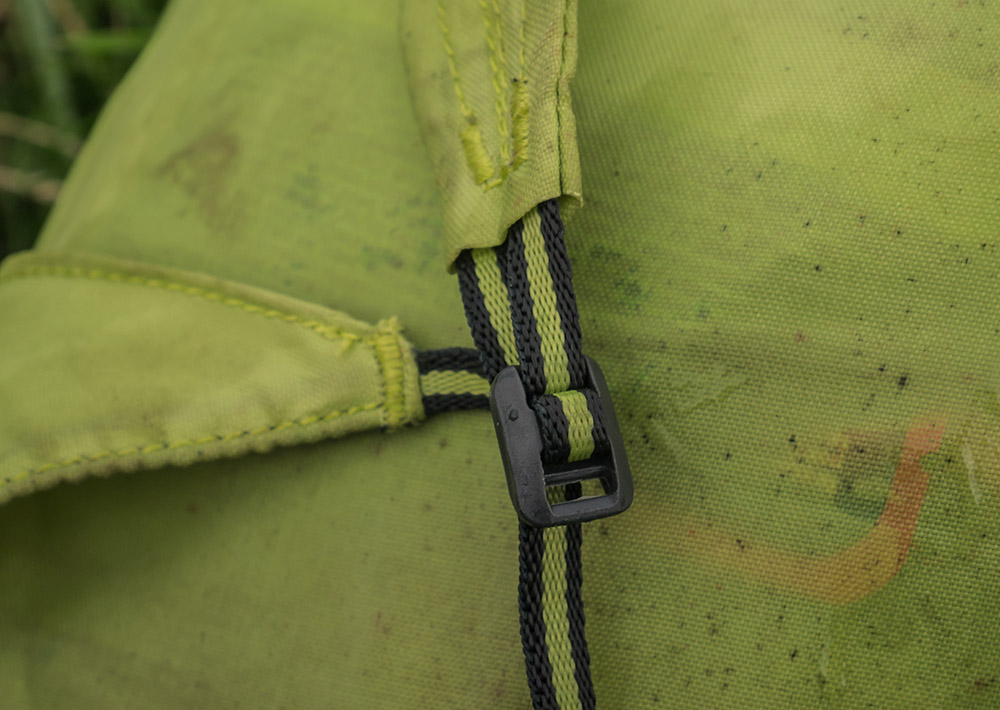 At the base is a single large drainage hole. 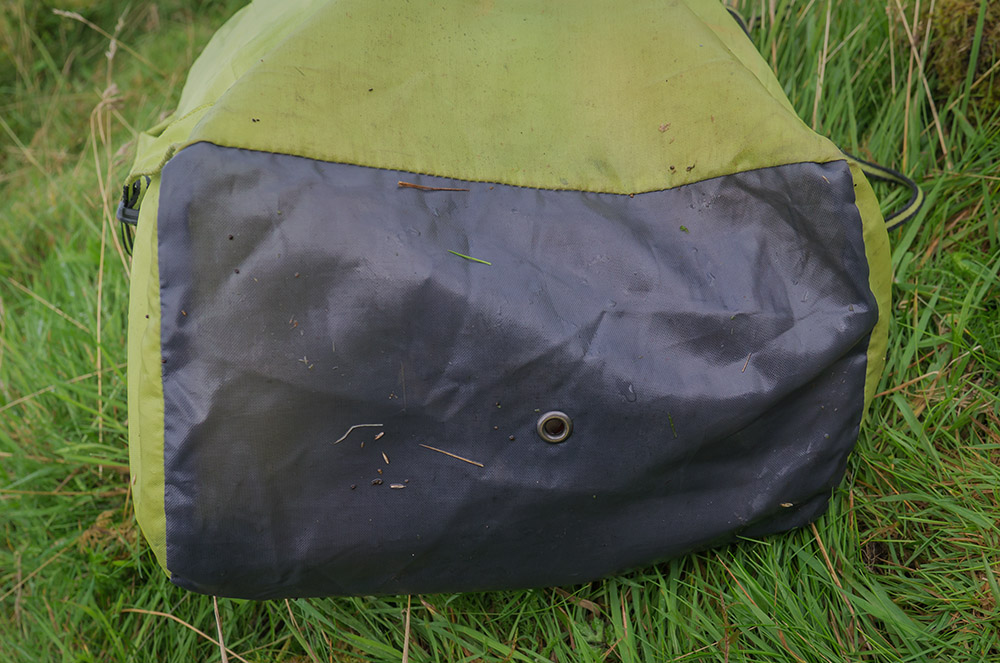 The Edelrid LB30's base has a single drainage hole.

That's pretty much all there is to the Edelrid Lite Bag 30. The only thing worth adding, which we like over the Sea to Summit bag, is the fabric that Edelrid have used is very easy to repair. Though we've not had to make any real repairs to date, we've done some faux repairs to test it and it holds a stitch very nicely and is less fussy than some of the more exotic fabrics like ultralight siliconised Cordura. It would not be hard to make a meaningful repair in the field if one had to.

The only negative was that Edelrid should have taken this product more seriously and used better quality components for the closure. But since we've now done that for them, we're happy to recommend our modified version (which we've made available on our store on SYSTEM - note, we include the original components should anyone want to revert to the original).

Designed for Canyoning, the Edelrid Lite Bag 30 is an ultralight, highly packable, top-loading day-pack with a drawstring closure, adjustable straps and a drainage hole in the base.

For those that engage in long distance treks, the LB30 will hold a maximum of around 13 to 14 days worth of food supplies. When that food has been consumed and it's time for the return journey, the LB30 makes an excellent travel / carry-on pack for when your main pack is in the hold.

With a couple of additions (a sit-mat as back-pad and a dry bag), the LB30 becomes a very capable ultralight day-pack for speedy hikes and scrambles.

All in all, an excellent durable lightweight bit of kit with a minimal pack size. Clearly, such a functional item has no place in a dysfunctional world and so had to be discontinued. Fortunately we've rescued a batch, improved them where they needed improving and made them available while we search out a worthy successor. It could take some time. Until then the Edelrid Lite Bag 30 deserves a special mention and is, for the time being, our top pick in the food and travel pack category.