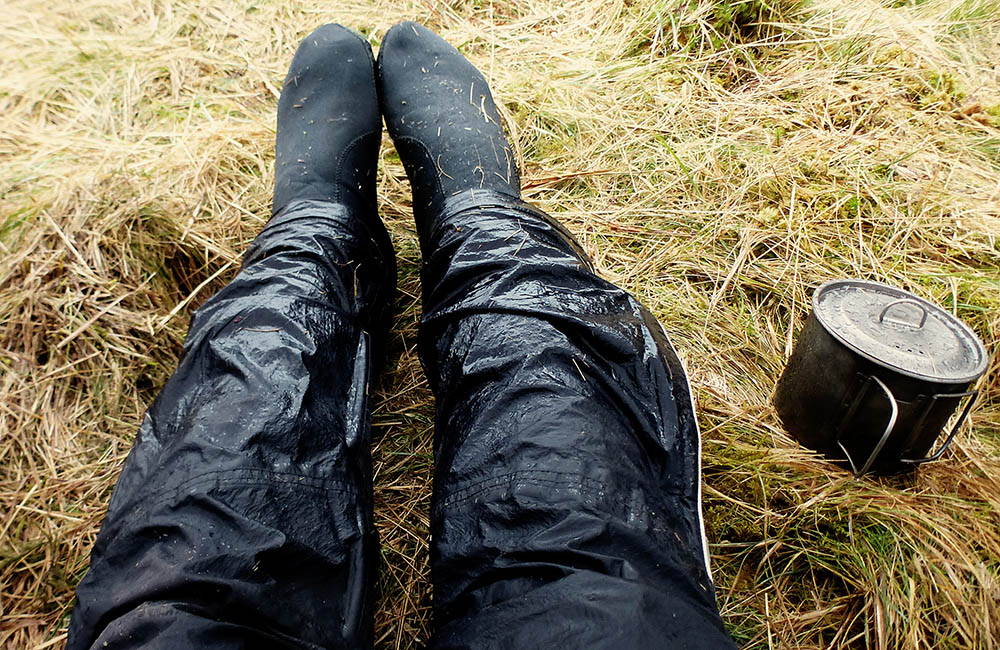 As always, we're looking at the Keela Lightning Trousers from the point of view of long distance trekking over tough terrain.

Introduction: A Little Damp Or A Lot Soaked

As we've stated before: "Scotland is an ideal place to design and test waterproof clothing, and so perhaps it's not surprising that Scottish manufacturer Keela do best with apparel suited to their dreich home conditions; if it's wet or if it's cold, Keela may have something to offer. If it's cold and wet, all the better". Of the three Keela items that have most impressed Scramble, two are for the wet (the Saxon Jacket and Lightning Trousers), the other is for the cold (the Belay Smock).

We all shrug off a dusting of light rain; no one minds getting a little wet, if we did, we wouldn't wear waterproofs, since everyone gets a little wet from condensation when wearing them. The purpose of waterproofs is to prevent us from getting soaked, and so we have to carry that insurance policy known as the hard shell.

Waterproof trousers are a tricky one. You have to carry them (certainly in colder conditions), so you want them to be as lightweight as possible. Yet, in use they can take quite a pounding and (when their weight is no longer on our backs) we expect them to be suitably tough and durable. Some degree of compromise is required.

Aside from being waterproof, reasonably light-weight and durable there are a number of other things we require of waterproof over-trousers:

Let's see how the Lightning Trousers fare. But before we get into the details, a general overview.

Keela's Lightning Trousers are made from Rainlife 2000 fabric, a lightweight outer nylon with a hydrophobic (PU, to you and me) coating. The problem here is that PU doesn't tell us much, REI explain:

Not all polyurethane is created equal. Polyurethane can be formulated to create a wide, wide range of products, from spongy foam to a hard faux-wood furniture finish. Thus whatever proprietary steps are taken to formulate polyurethane for use as a Waterproof/Breathable membrane determine its performance attributes.

The tape sealed, hydrophobically coated, Lightning Trousers are certainly waterproof, they are also "tough and durable" as Keela claim, but how breathable are they? This is trickier to answer.

I've worn the Lightning Trousers over days when it hasn't stopped raining, in both warm and very cold conditions and, as with all waterproof clothing when working hard, there's always condensation on the inside. With a single layer hard shell (as with a single layer tent), that's likely to be a little worse, but is it problematic? Not if one wears sensible synthetic / softshell trousers underneath, then it's not really an issue. To put it another way, I've never wanted to take the Lightning Trousers off due to overheating and I've never taken them off and been soaking wet from condensation. So, in my view they are breathable enough without being miraculous.

Breathability is pretty much inversely proportional to windproofness; claims of breathability should be considered with this in mind. The Lightning Trousers are, as Keela state, windproof.

Keela's waist sizing is accurate, for a 33" waist the size 34s are fine (with enough room for another inch or so). They have an elasticated waist and belt loops, though I've not found the need for a belt. In terms of leg length, I'd say the Lightnings are a little on the short side. With a 30" inner leg, I'd normally be a Short leg, but here the Regular is a perfect fit for me wearing heavy duty walking boots.

One of the stand-out features of the Lightning Trousers are their articulated knees, which allow them to have a sleaker cut without being restrictive. Compared to many waterproof over-trousers which often suffer from being too baggy and flappy, Keela have got the Lightning's cut just right, and with two velco adjustment tabs at the ankle and calf, the Lightnings appear pretty streamlined from the knee down.

The Keela Lightning Trousers have two velcro adjustable straps backed with a reflective panel, one at the ankle and one at the calf.

Velcro adjusters at the ankle and calf

The dimensions of the tabs and the quality of the hook and loop are both ideal and once set in place they do not come undone. This allows the Lightnings to create an almost perfect seal around the boot, better than one would get with many gaiters, indeed the Lightning Trousers are superb for wading through bog and marsh. 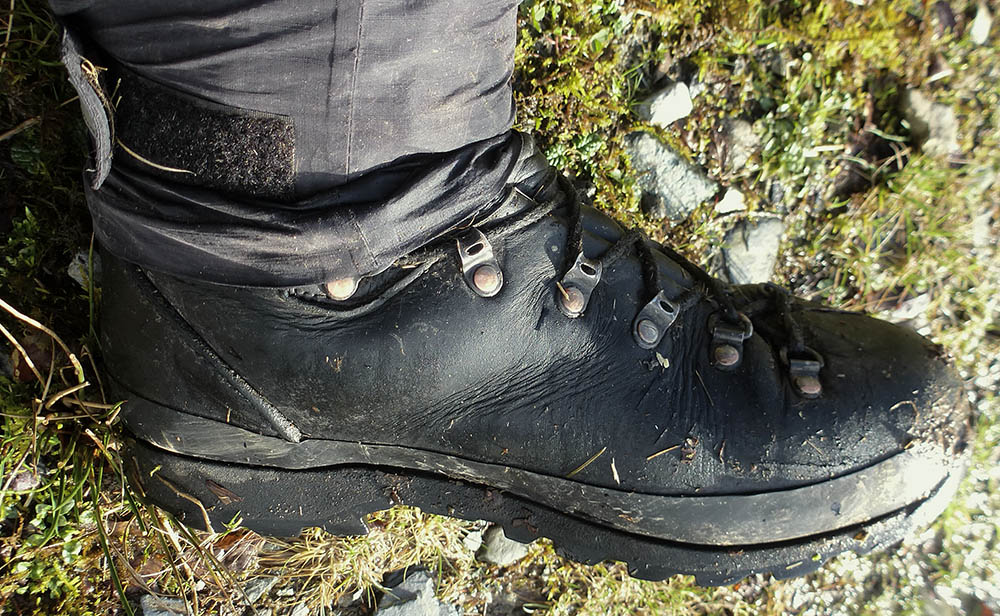 The Lightnings clamp the boot at the ankle

The calf adjuster is an added bonus, allowing the Lightnings to have a very tidy, leg hugging fit, ensuring they don't get snagged on rocks or undergrowth.

The ankle zip is approximately 34 cm in length and unzipped reveals a storm flap. The storm flap, attached at both sides, limits the degree to which the Lightnings can be opened, this makes putting them on over large walking boots a little more fiddly than we'd like. You can't pull the Lightnings on while standing; you need to sit down to get them on over boots. The storm flap approach ensures absolute waterproofness, but Keela should have made the storm flap wider at the base. One point deducted for function. 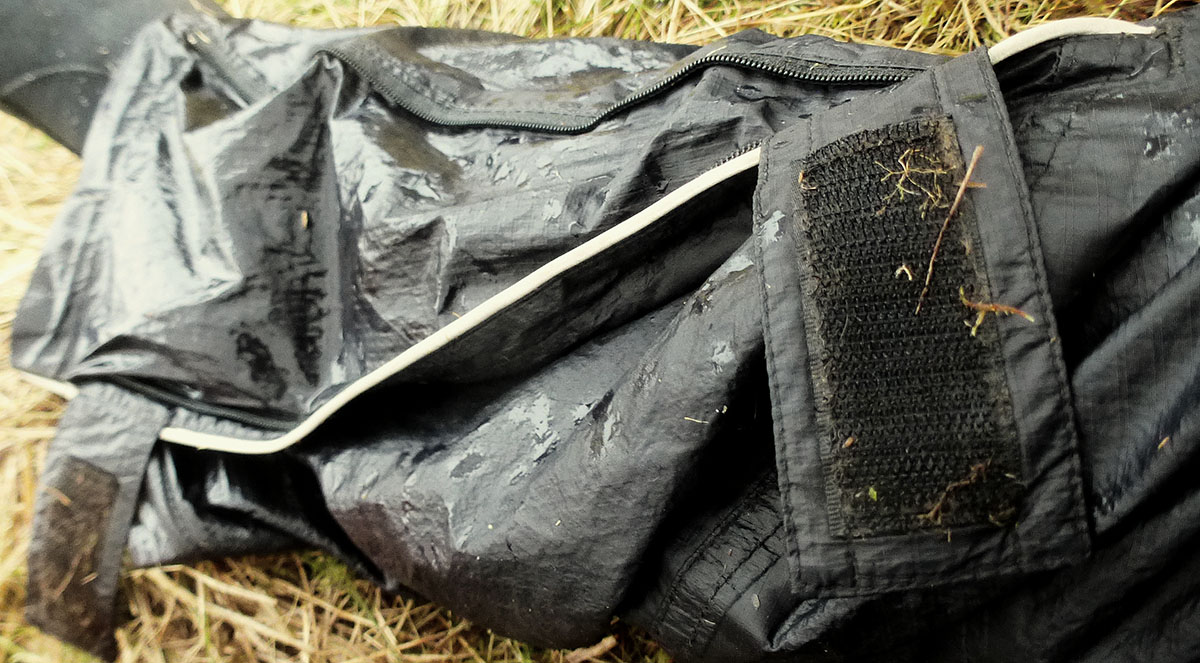 The Lightning's storm flap could be a little more accommodating

As with other Keela offerings, the (ankle) zips could be better. They do snag (generally catching the storm-flap), but fortunately un-snag equally easily. Since we're not frequently changing in and out of these, in practice this has not been that big a deal, but it's not a positive either. The velcro straps are so good that, in a hurry, one could simply ignore the zip and just fasten using the velcro. But a half a point deducted here for function. 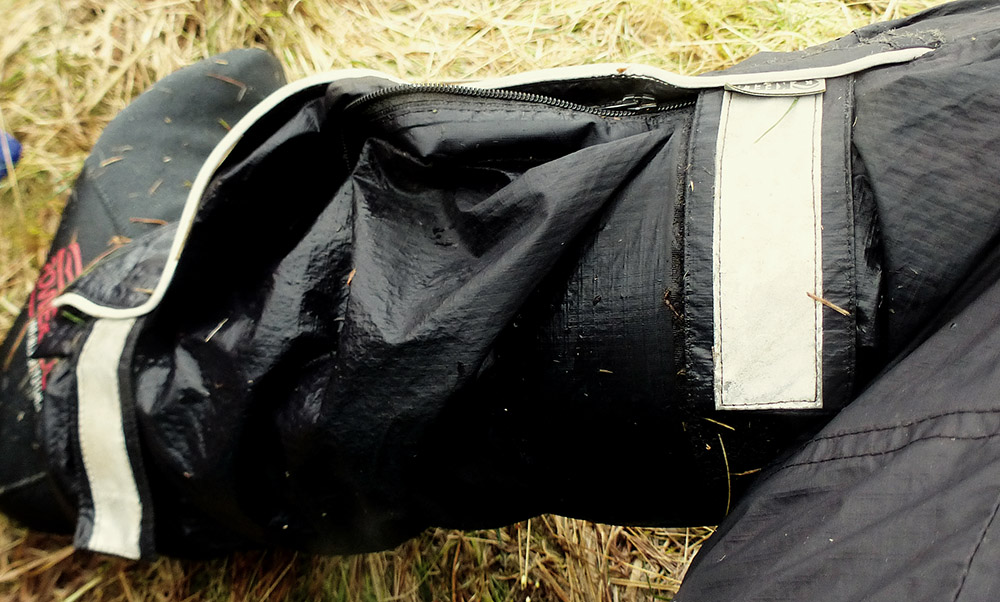 The Lightning Trousers feature two press stud fastened pocket openings allowing access to ones trouser pockets. These have a little overlap and also allow a small amount of venting. A little water may make its way in, but this is not something I've really noticed in practice. Overall a positive more than a negative. 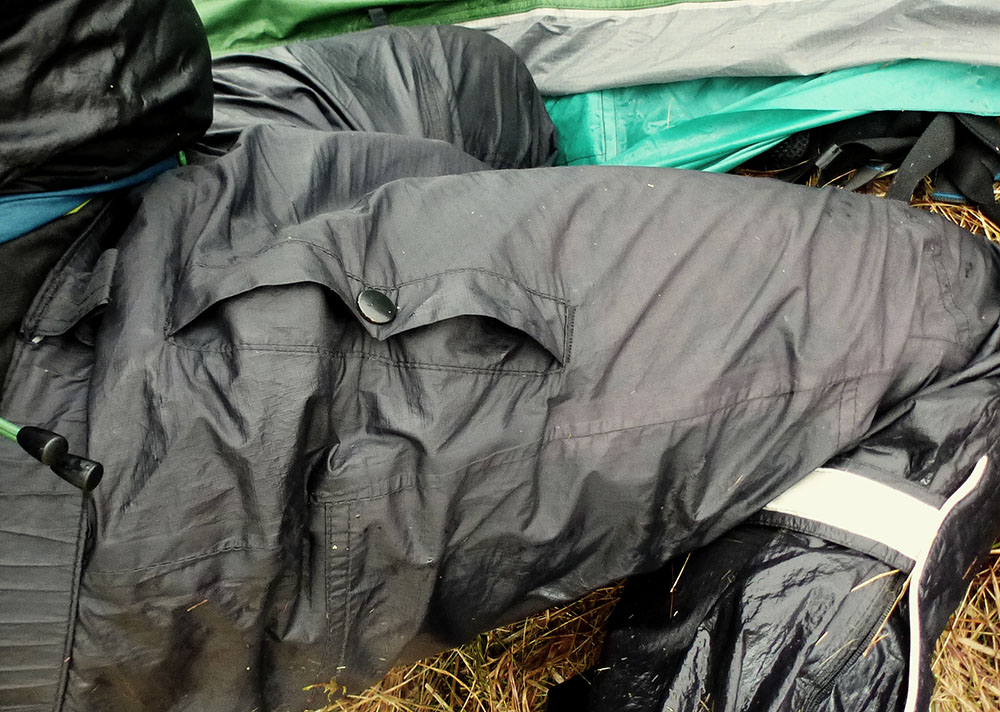 The Lightnings have a press stud tab closure at the waist and a zipped fly, another welcome yet reasonably uncommon feature.

The Lightning Trousers don't come with a stuff sack or pack up into themselves, but can be rolled up pretty tightly and don't take up much room in ones pack. 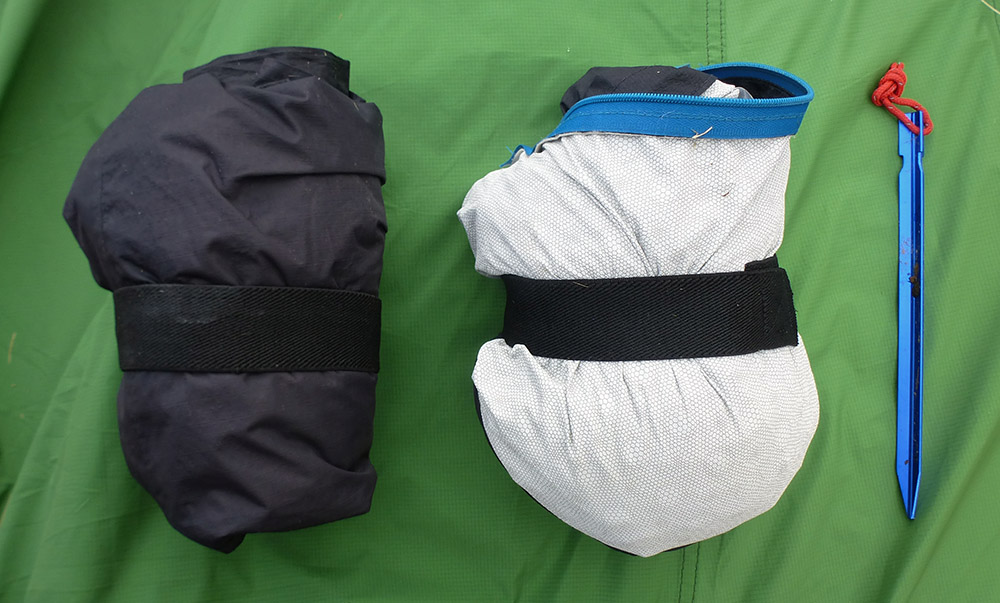 You can spend a lot of money on waterproof trousers, Keela's Lightning Trousers mean you don't have to.

The Lightning Trousers are not the lightest (there are lightweight options, whose durability we would question, that are nearly half the weight) and there are better performing fabrics too, but Keela have got the balance between weight and durabilty just right. The Lightning Trousers are robust enough to not worry about abusing, yet light enough to not have to ponder their necessity. Their superb cut, articulated knees, velcro fastenings at the ankle and calf ensure an excellent, streamlined, non-restrictive fit. 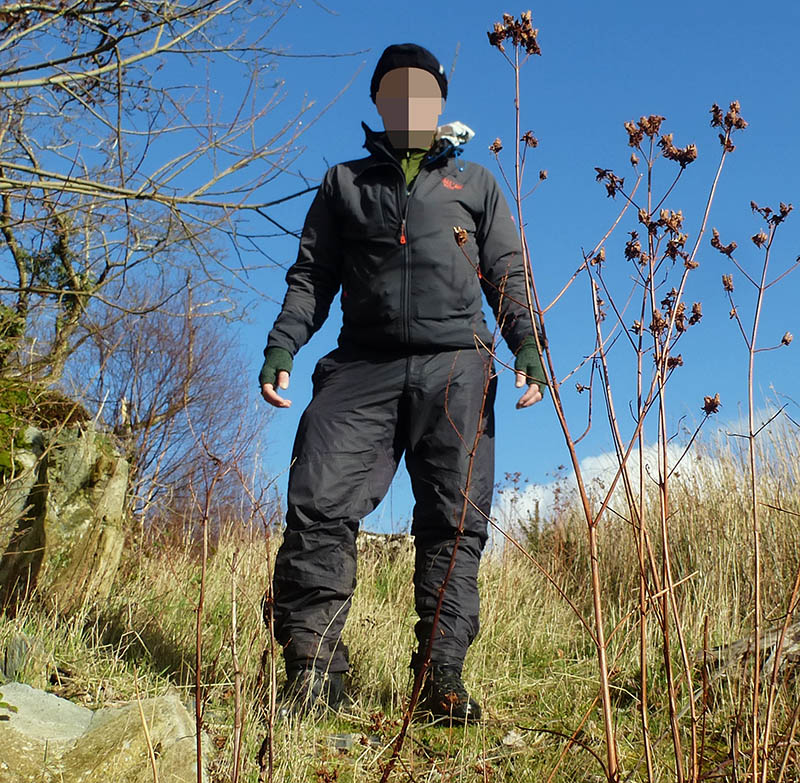 Finally, sun! The 2017 Winter Kit Test was the wettest to date.