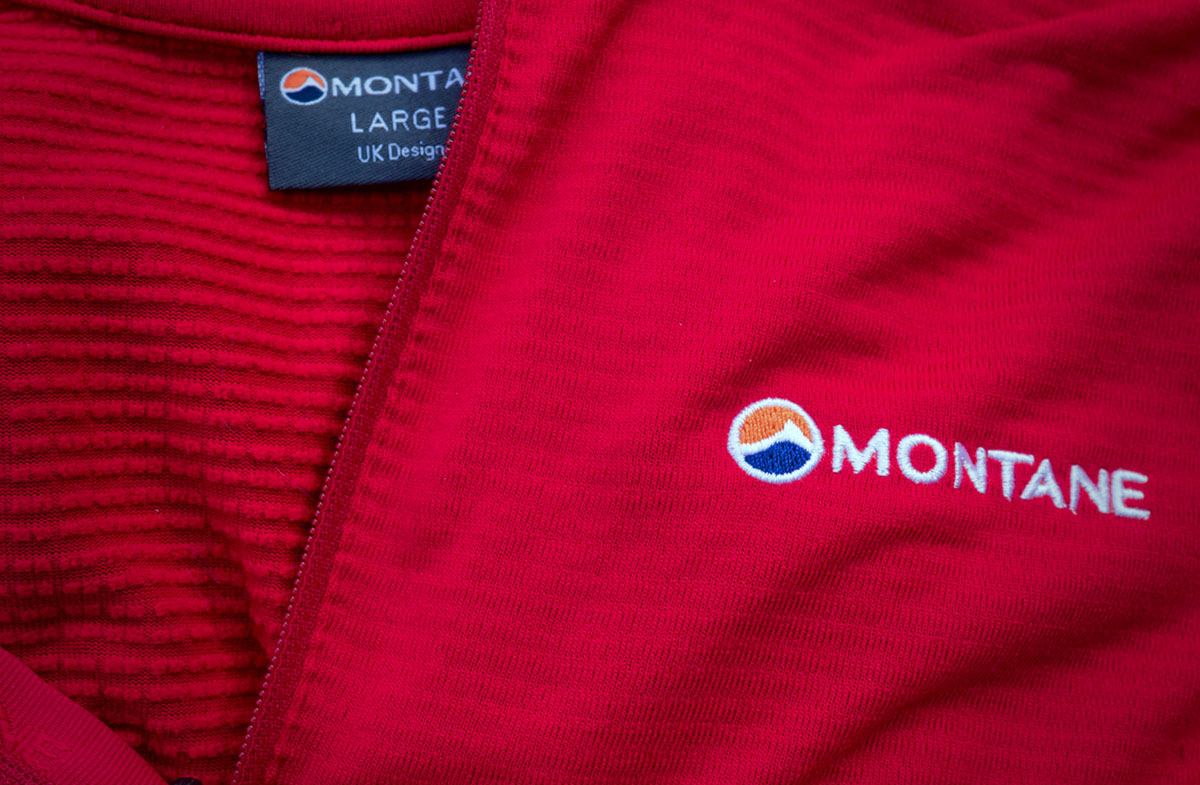 This review currently serves as an adjunct to our parallel recommended sleepwear top, the Odlo "Windblock" Crew.  This excellent top is no longer made by Odlo but a few are available in our store on SYSTEM and are still a great option. Until these are gone we'll keep both reviews live.

As always, we're looking at the Montane Allez Micro Pull-On from the point of view of long distance trekking over tough terrain.

When covering long distances over multiple days and weeks, you need two kinds of clothing: one you do all the hard miles in, the other, a vigilantly protected dry option you clamber into when the day's trek is done. Here we're looking at the latter, what we classify as sleepwear but is really also camp/tent wear.

What we're looking for here is a good warmth to weight ratio (since you're carrying it most of the time), a small pack-size, a durable enough material to handle the push and pull of changing clothes in cramped conditions, but perhaps most importantly, comfort - since morale and a good night's sleep should not be underestimated. 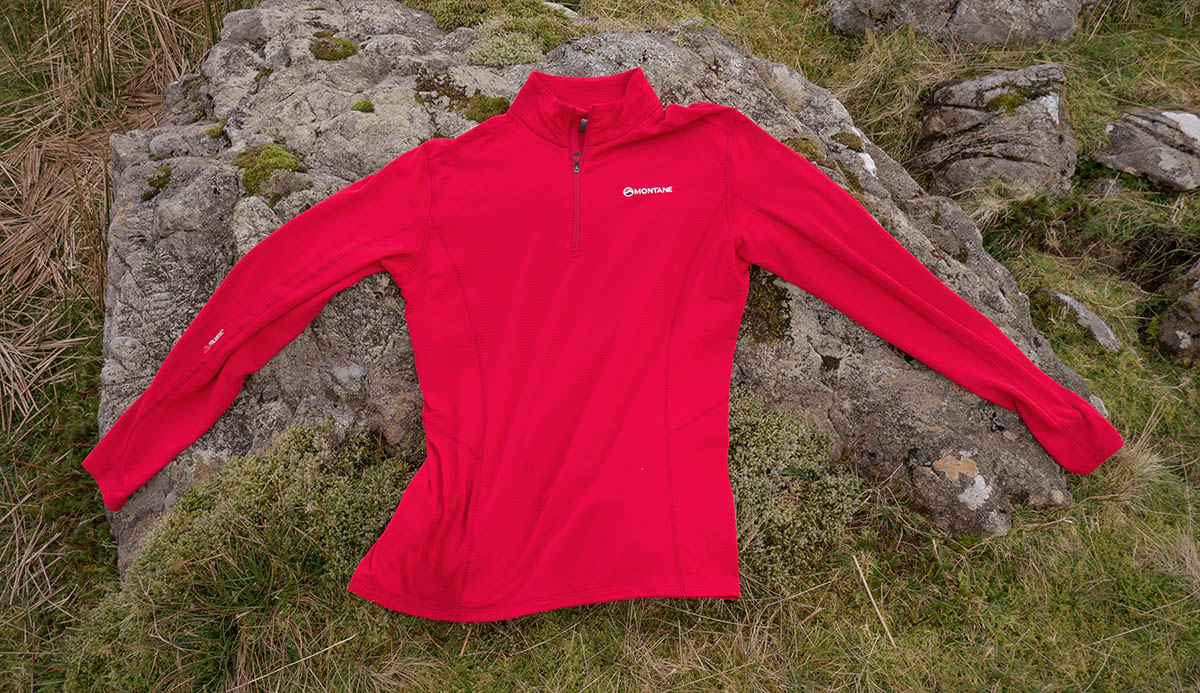 In our review of the Odlo Warm Originals "Windblock" Crew, we wrote, "perhaps, the perfect top would weigh as much, be just as warm and breathable, and have a high zipped collar". But we felt such features would add unnecessary weight.

The Montane Allez Micro Pull-On (we'll call it the Montane AMP from hereon) offers precisely this while shedding a not insignificant 25g (large to large comparison) and it packs down noticeably smaller. But at what cost?

The Montane AMP, when worn on its own, is not quite as warm as the Odlo top and its face fabric has a pretty open-weave (whereas the Odlo provides some wind resistance via its tightly woven front panel), so the Montane AMP works best under a wind-resistant layer like an insulated jacket or inside a sleeping bag. In winter, you're certainly not going to be wearing this outside on its own; likewise for cool summer nights, where a light insulated jacket would be a standard and sensible companion.

There's no better insulator than air, afterall a down jacket's raison d'etre is "loft" (the creation of an air gap between your warm body and the cold outside). The Montane AMP follows a similar principle but handles things a little differently, using Polartec Power Grid (a New York city planner's take on the traditional fleece inner) where small brushed polyester blocks create a gridded array of channels, trapping warm air next to the skin.

This all works well if cold air isn't rushing over the upper face fabric causing all that heat to transfer to the outside via convection. Thus, the trapped air requires an additional wind resistant layer (e.g. windtop, sleeping bag, etc ...).

This is what Malden Mills say about their Polartec Power Grid "technology":

The next-to-skin surface is hydrophilic to absorb sweat vapor and transfer it outside. Then the outer surface disperses moisture for more efficient evaporation. The grid design also creates open air channels that improve breathability, and reduce fabric mass.

So, the Allez Micro Pull-On is definitely a next-to-skin, semi-insulating baselayer rather than a lightweight thermal mid. This is relevant when we look at the other item short-listed by our team that was tested alongside the Montane AMP - Rab's Flux Pull-On, which I would say is two thirds mid-layer, one third baselayer. More on this later.

So that's all the theory out of the way. Let's see what the Montane AMP has to offer in practice.

The first thing to note is that the Allez has a high collar with a zip that reaches down to the lower part of the sternum. During this winter's kit test, I generally wore my balaclava as a neck gaiter around camp, and the collar on the Montane AMP worked well to seal in the warmth.  Additionally, the zip makes it a little easier getting the top on and off, resulting in less stretching and wear on the fabric. 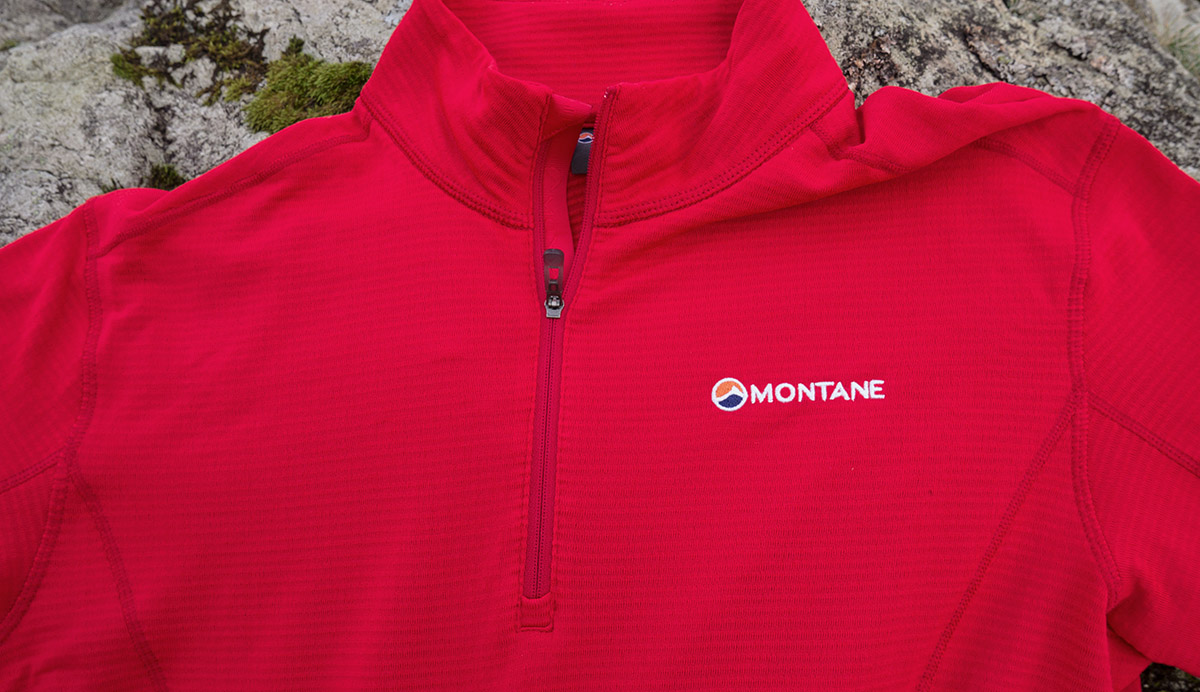 The Allez Micro Pull-On's half zip and full collar.

The Allex Micro Pull-On is extremely comfortable, not itchy in the slightest and frankly a joy to wear whether sleeping or operating around camp. It has a good degree of stretch and rebound and holds its shape very well.

In terms of fit, the AMP strikes an ideal balance, being reasonably fitted but not compressive, exactly what you want for sleepwear.

The cuffs are narrow but not elasticated. I wear wrist gaiters permanently in winter and so this is not an issue. That said, some may prefer an elasticated wrist. We'll dock a point here (to give us something to do). 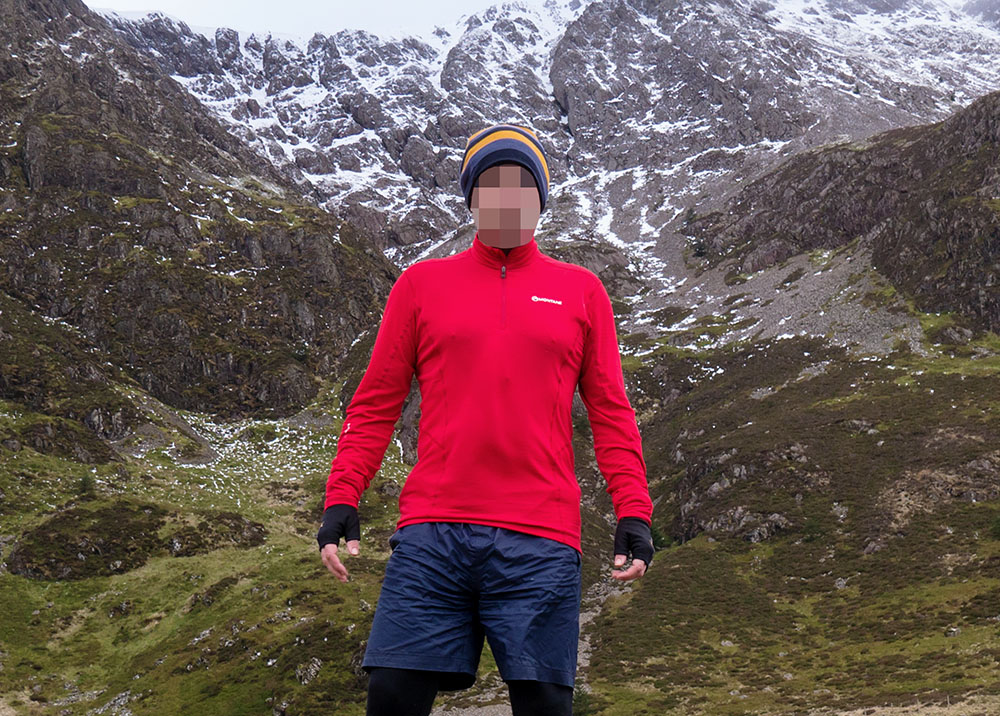 Reasonably fitted but not compressive.

Pictured below is the full 2020 winter kit sleepwear / campwear ensemble:

What's missing of course are the insulated jackets I wore on top (the Quechua Down Gilet and the Keela Belay Smock). So yes, in these photos, in case you were wondering, I am indeed freezing my arse off. 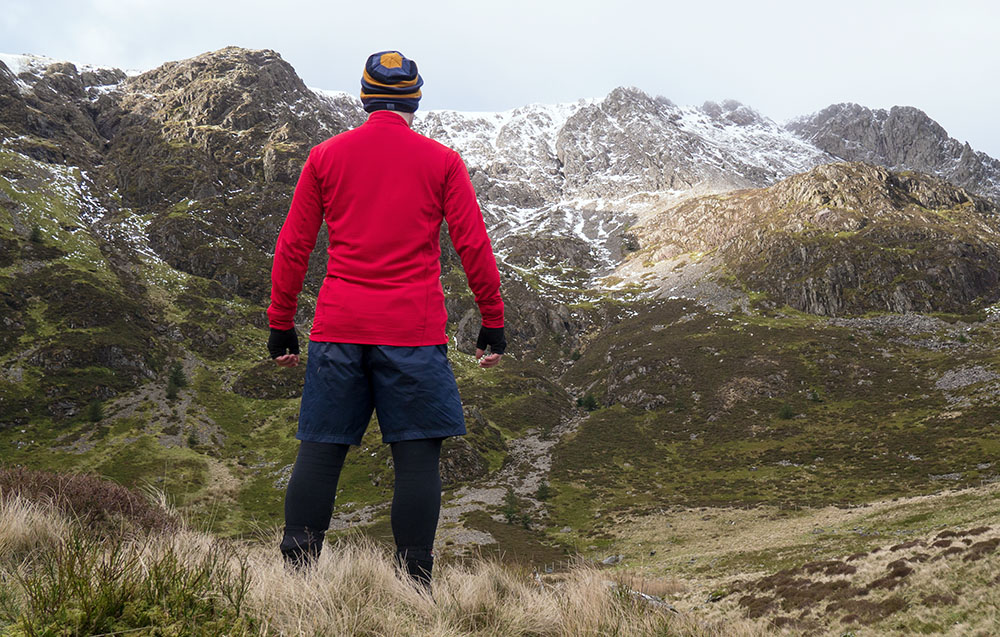 The Montane AMP has ample length in the torso, allowing a good portion to be tucked inside a pair of long johns (leggings). Additionally, unlike the Rab Flux (pictured below) the fabric has a slightly textured (non-silky) outer surface ensuring that once tucked in, it stays put. This is helpful in sub zero conditions where you're always trying to minimise cold spots.

... But Compared to What? Trialing the Flux

The other finalist selected by the Scramble team, was the Rab Flux Pull-On. This top shares some of the characteristics of both the aforementioned Montane and Odlo tops. A high collar and (deeper) zip like the Montane, a tight weave like the Odlo's front panel and a similar but less fluffy, brushed inner. In fact, if you took the front section of the Rab Flux and stitched it to the back section of the Montane Allez, you'd end up with something very similar to the Odlo item, but with a zip and a high collar. 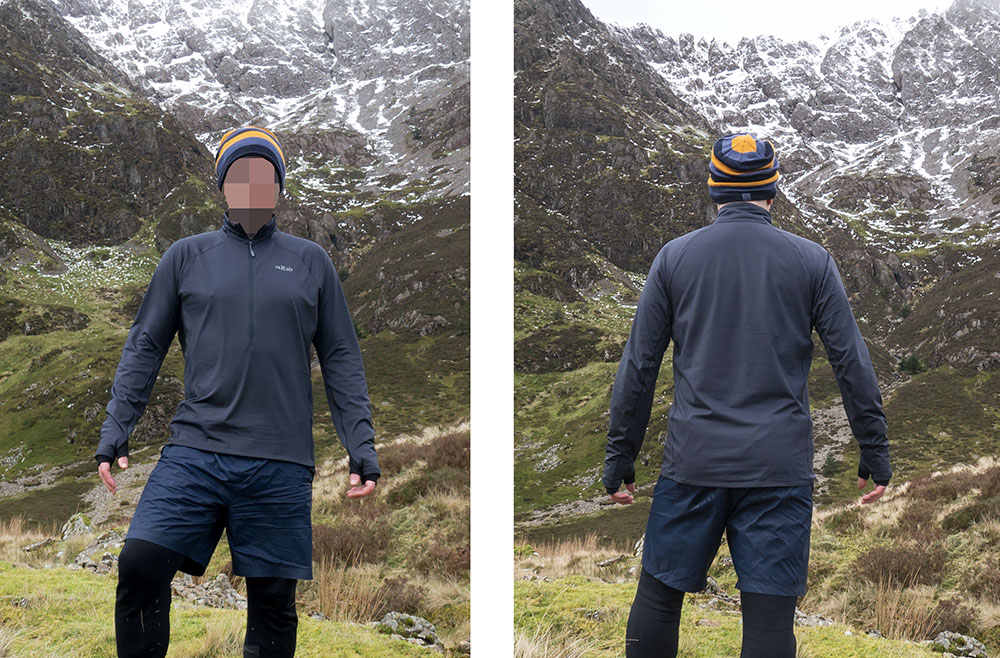 Rab's Flux Pull-On, a great lightweight mid-layer, but not quite right our purposes.

The Flux, as we stated earlier is much more of a mid-layer, a lightweight thermal-mid with a lightly brushed inner, a very deep zip for venting and thumb loops, all of which are standard mid-layer fare. The Flux offers better wind protection but when worn under other layers it didn't seem noticeably warmer. It's comfortable enough, though not quite as nice as the Montane. However, where it really loses is on packability and weight. The Montane takes up almost half the space and weighs substantially (58g) less (on a large to large comparison).

So the Montane wins on comfort, pack-size and weight but loses on wind-resistance, perhaps durability (though yet to be determined) and price (£65 vs. £50).

We recommend two expensive options for the upper and lower body when it comes to camp / sleepwear.  Many will baulk at the cost of a pair of Power Stretch Pro Pants (currently £75 RRP), likewise shelling out £65 for the Montane AMP (though you should be able to get it for around £45) may seem excessive. At Scramble, we score value quite aggressively and are profoundly cognisant of the often stupid price tags that hang off outdoor gear.

However, with sleepwear there's a caveat. The items mentioned in this review are designed for active mountain use. We're recommending them (in extremis) for sub-zero camp and sleepwear duty. In terms of wear and tear, they're getting a super easy ride. So we expect to get many, many years of use out of such items.

If you spend £100 on outdoor "pyjamas" (tops and bottoms). Even if they last only 5 years (that's £20 per year). In our view it's worth getting tough, packable, lightweight sleepwear, to be warm, comfortable, well rested and feeling positive (in conditions, which let's face it, can be depressingly hostile), rather than buying mediocre kit that gnaws through your morale with the bite of a thousand annoying niggles. 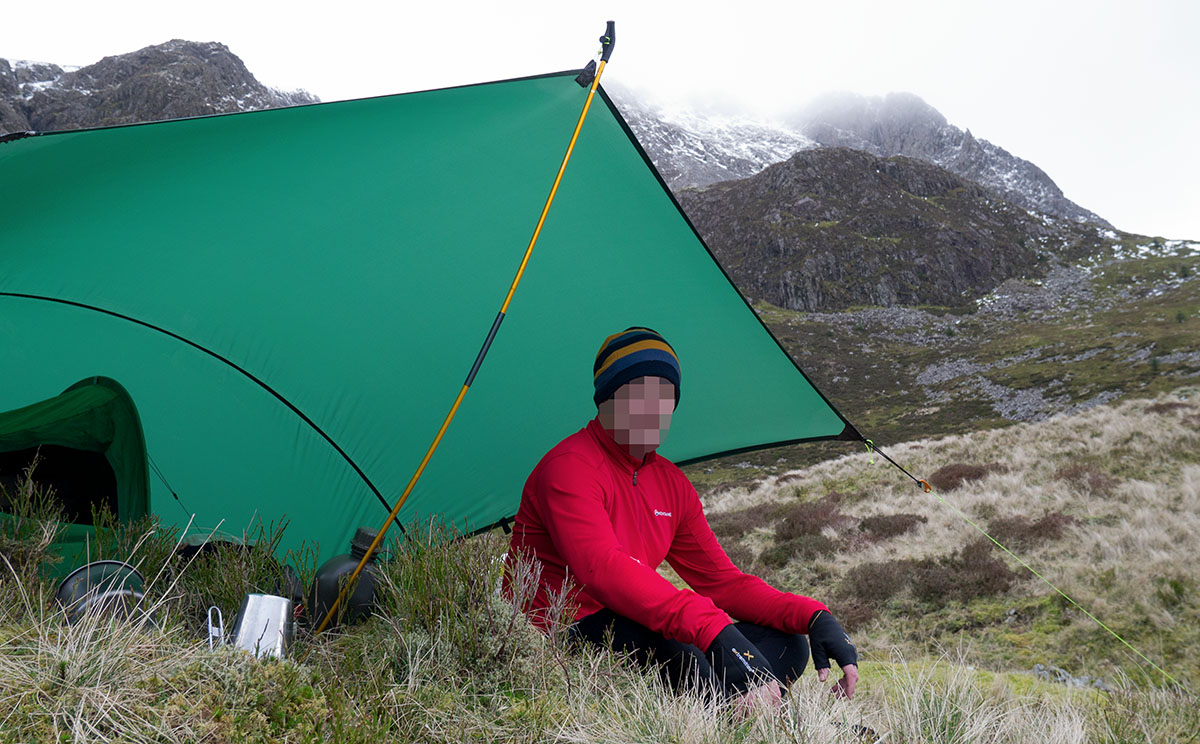 Montane's Allez Micro Pull-On is our top pick for chilling around camp.

For our purpose, which is not the purpose for which they were designed, an elasticated wrist would be preferable. Though, if like me you wear wrist gaiters in winter on an almost permanent basis, this is not an issue. We've dropped a point for function.

If we could tip the scales slightly away from breathability toward wind resistance we probably would. But moisture wicking and "breathability" are useful attributes when you're damp and are trying to dry out under your insulated jacket or inside your sleeping bag. We've dropped another half point for function.

Finally, the only other negative is the price. The Montane AMP, like many items that actually deliver lightweight warmth, is not cheap. We think it's worth it, some will no doubt disagree. This is reflected in the value score of the rating.

In terms of design the Montane Allez Micro Pull-On looks like many other base and mid-layers on the market. However, it's what's on the inside that sets it apart. Polartec's Power Grid provides effective, lightweight, insulation without bulk.

The Allez is reasonably fitted but not compressive, its flatlock seams and soft inner gridded fleece make this extremely comfortable against the skin, ensuring you get a good night's sleep in even the most stormy conditions.

In winter, when items are bulky, anything to reduce pack size and lighten the load is welcome. The Montane Allez Micro Pull-On does both ... at a price. It is expensive, but when spread over the likely lifetime of the product, we think it's well worth the investment.