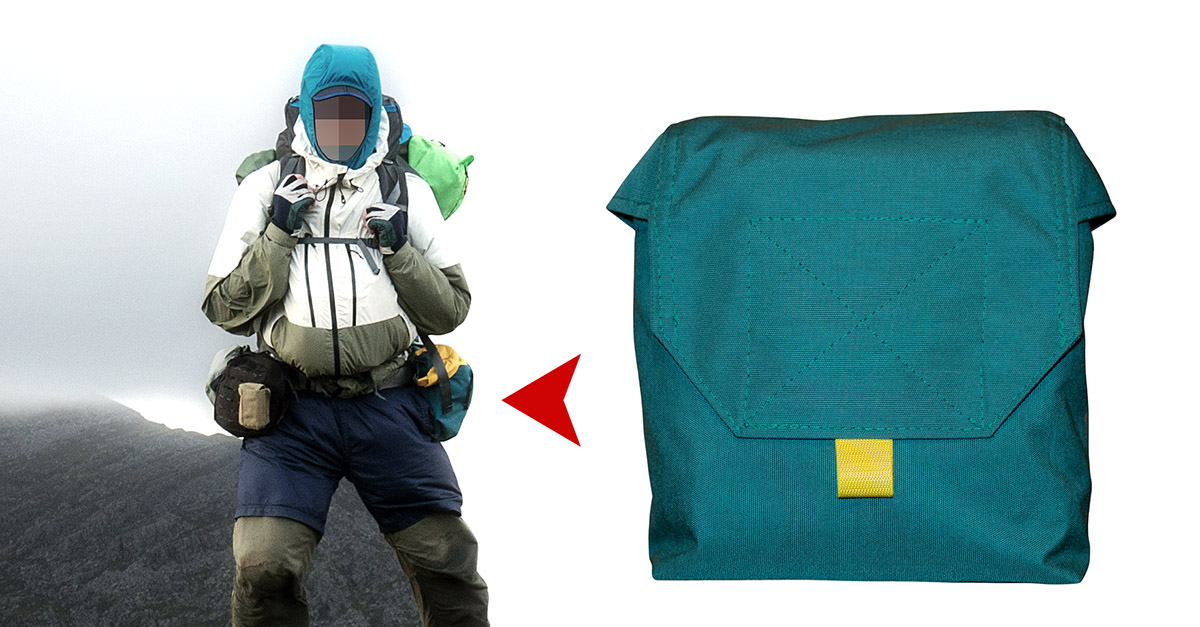 A couple of things to note. Firstly, the item photographed in this review is a prototype, as such the finishing is a little rough and ready; the product images at the bottom of this post show the final retail versions. The other thing worth mentioning is regarding the colour. The blue-green colourway does strange things in the blue light of day, which seems to wash out the green. It's hard to say, that the actual colour is X rather than Y. Under studio lighting it looks greener, in natural light, more blue. What can you do?

As always, we're looking at the Scramble "Machine" Belt Bag from the point of view of long distance trekking over tough terrain.

Test subject: Chest 42", Waist 33", Height: 5ft 8"
Test item: Zanskar Blue-Green, 500D Prototype
Kit Tests: Winter, Summer
Disclaimer: This item is manufactured by Scramble. We made this partial clone of the TAS MOLLE LMG pouch because Templar Assault Systems stopped making them. You should be able to check for any bias by referring to our review of the original (a product we had no stake in).

Firstly, if you're unsure what this is all about and why a separate belt setup is a good idea, see the Postscript below.

The old Templar Assault Systems MOLLE LMG pouch was designed to carry light machine gun rounds, but its creators accidentally came up with a near-perfect belt bag for long distance trekking. So, when TAS stopped producing them, we decided to step in and make a partial-clone; keeping all the major elements that made the original so good, but re-working some of the redundant artifacts that betrayed its military heritage.

We called our version the "Machine", both as a hat-tip to its predecessor's lineage and because one of the attributes both models share is they just work, like any good machine, efficiently and without fuss. 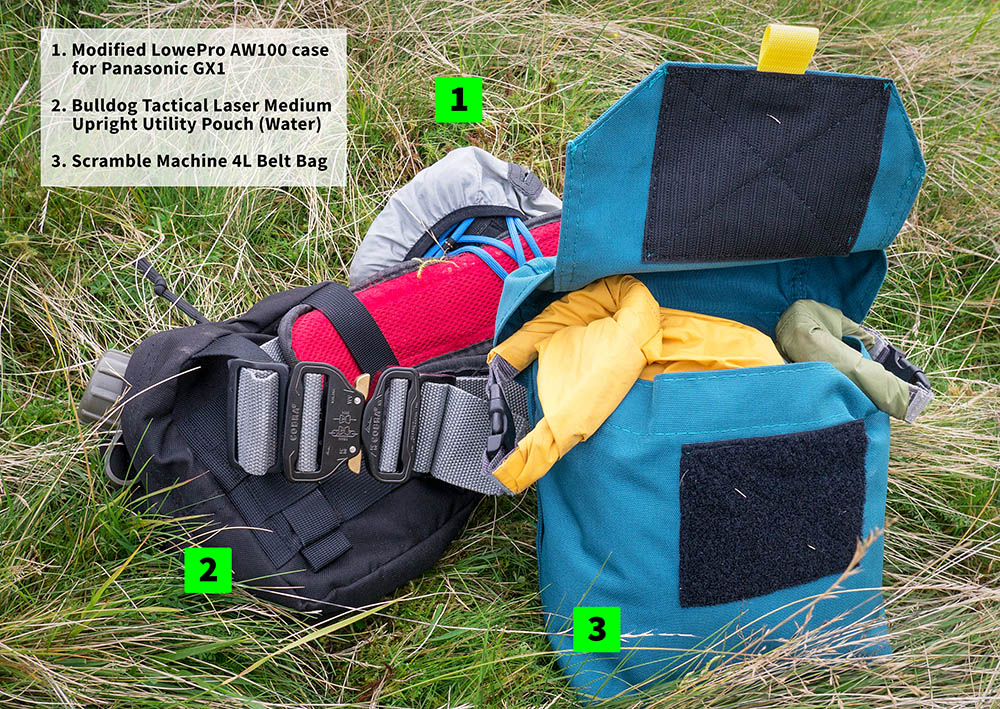 Wearing the bag on a padded belt, the Machine Belt Bag (MBB) looks almost identical to its predecessor. The basic design, the large hook and loop closure, the pull-tab and drainage hole are all identical. However, there are some important differences, so let's see what they are ...

One of, perhaps the only, annoyance with the original TAS model, was that in winter when accessories such as hats and gloves tend to be bulkier and thus occupy more space, you often had to really cram stuff in, and this sometimes made retrieving items tricky. The original model had a mini side-pocket designed to house lubricating oil for ones light machine gun (you know, the one you keep in the shed). This has been removed and the extra real estate has gone into the main body of the bag. The main body is now 2cm wider and we've also added 1cm to its depth, giving the bag a more comfortable, genuine 4L capacity. There's still a pocket, but it's now inside.

2. A move away from the MOLLE / PALS attachment system

The biggest change has been to the belt attachment method. We're of the belief that the benefits of a belt system shouldn't be the reserve of the military. Shifting loads from the shoulders to the hips and having one place for all the things you want to hand while on the move makes just as much sense for civilian trekkers as it does for those in the services. For this reason, we've replaced the MOLLE attachment system with a simple, durable and extremely accommodating belt loop. 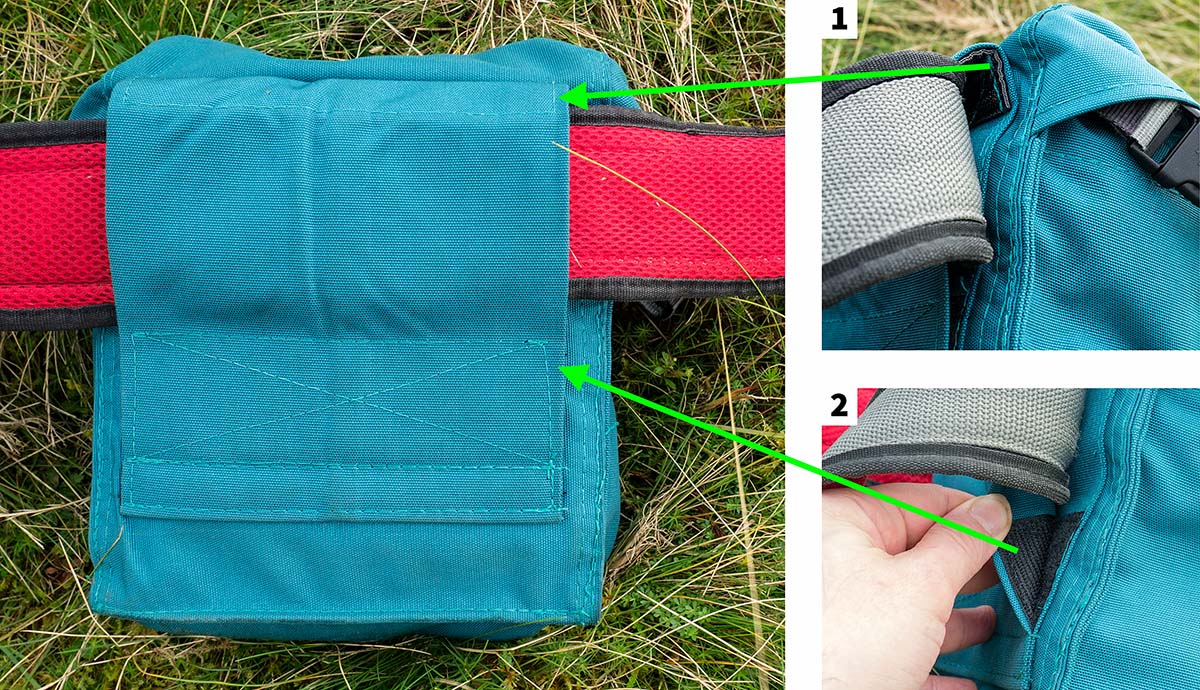 The loop has a default opening of 9cm (~3.5") and can be extended via the "Velco Loop Adjuster" (see #2 above) , to 14cm (~5.5") for very large padded belts. Though the MOLLE system was very secure, a closed loop is even more so. Further, the main impetus for the shift away from MOLLE was simply because most people (that have no connection to the services) are unfamiliar with the whole PALS webbing business, but everyone knows what a belt loop is.

Although Cordura is highly abrasion resistant, we decided to provide additional insurance against wear and tear with a densely woven webbing reinforcement at the inner-top of the belt loop (pictured above, #1).

3. The Pocket's On The Inside

I used the external pocket on the TAS version for a ~100g windtop. We've moved the pocket inside; it's still easily capable of holding the same item. The internal pocket is 17cm wide and 13cm deep.

4. A Choice of Fabric Weights

The Machine Belt Bag is made from rot-proof nylon Cordura. The Blue version is 500D and weighs (185g) and has a lighter PU inner coating. The Grey version is 1000D and has a slightly heavier PU inner coating and weighs (220g). Both versions are tough as nails and very weather resistant, though if used in the recommended manner (in concert with light dry bags as pictured) this is somewhat moot. The real purpose is to handle the load and the jolting forces put upon it as the user ascends and descends and to provide robust protection for all the gear carried within. This the MBB does with aplomb, just as the TAS version did before it.

We've kept the inside pretty simple, with just a back pocket and a drainage hole at the base. Let's have a quick look at what the MBB can hold (also check the studio images below, because they were shot with a more sub-zero content line-up).

I use the MBB to carry two types of gear: clothing accessories and "tools", and these I partition with two Exped Fold dry bags. 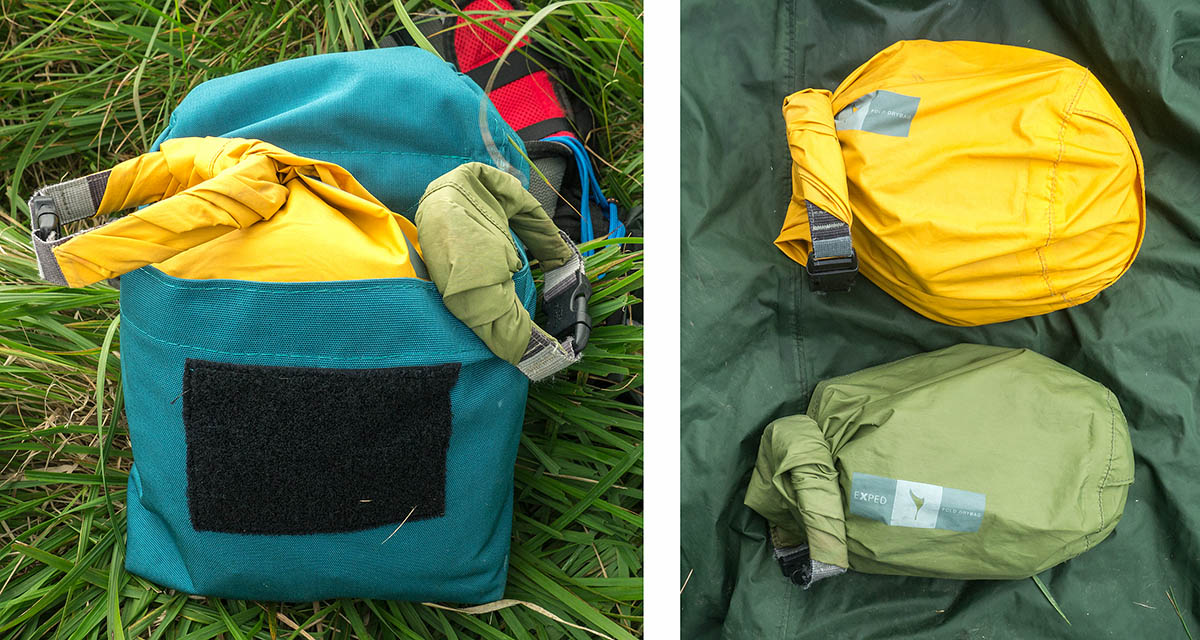 Here's what they contained in the recent "summer" kit test (and yes, everything was used except the mosquito net, fire steel, multimat repair kit and the spare knife). 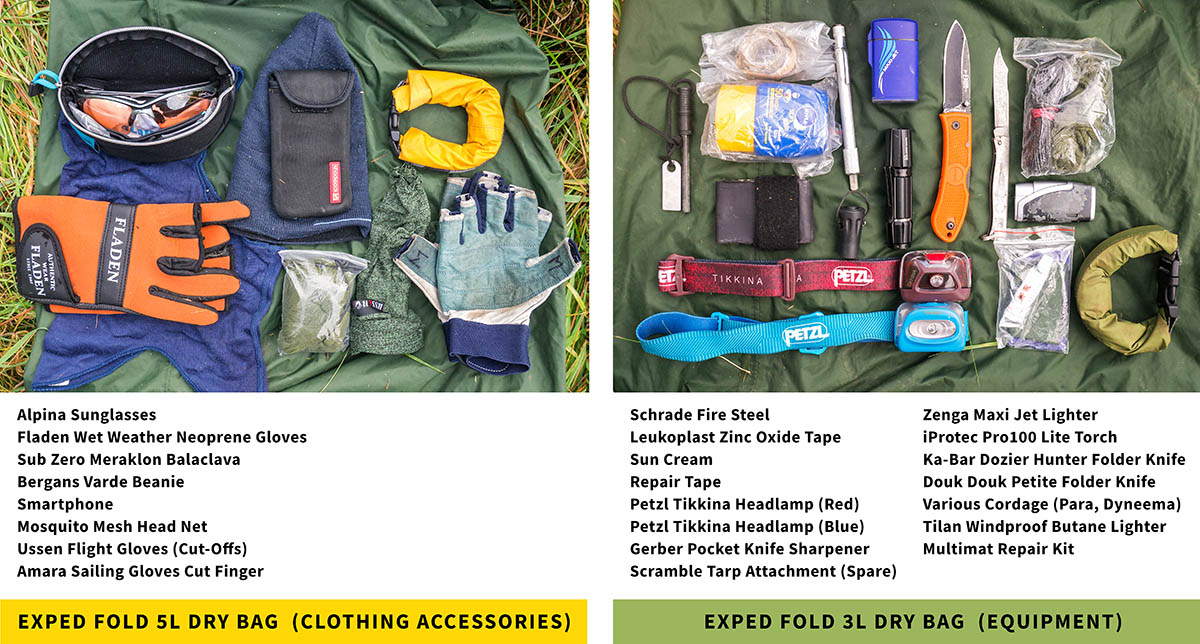 As with the TAS pouch, "the only negative we can come up with is directly a result of one of its great strengths: its robustness. As a consequence the [Machine Belt Bag] is not going to please the ultralight community", but equally it won't let you down either.

Before we jump to the conclusion, we're going to take a small detour and have a brief look at what belt & buckle to pair the Machine Belt Bag with.

There are two components of interest when talking about a good padded hip belt for a modular belt setup. The padded belt and perhaps more critically the buckle.

In terms of the belt, we've been very impressed with C K Magma's Compact Padded Belt. I've had mine for about five and half years, and though it's looking a little frayed at the edges, it's still going strong.

I'm sure there are other "padded tool belts" around (note: not all of them allow you to change the buckle) that are equally good, possibly better, but we've never really had the urge to look elsewhere, since the C K Magma is pretty cheap (~£10), is really comfortable (goes unnoticed, doesn't bite or chafe) and has been super reliable.

The buckle is the harder piece of the puzzle. Every single plastic 50mm buckle we've tried (including the high quality "security" clip versions) has "failed", and by that I mean failed to maintain a 100% fail-safe clasp 100% of the time). This is due to the heavy stresses from adbominal pressure when exerting oneself and torsion while climbing; the body twisting and turning at awkward angles tends to expose weaknesses in fastening mechanisms.

In search of an ideal combination, I reluctantly (at first, since £20 for a buckle seemed unjustifiably pricey) tried out the highly rated AustriAlpin 50mm Cobra buckle (with male & female adjustments). The Cobra buckle has a novel fastener which requires both clips to be depressed simultaneously, which is easily done consciously, but nigh on impossible by chance.  AustriAlpin confidently state that the Cobra Buckles are "the only stab-lock style fastener in the safety products market that will not open while under load".

Paired with the highly reliable C K Magma belt, this combination has been absolutely outstanding and I'd argue is pretty close to failure-proof.

So, this is what we recommend: 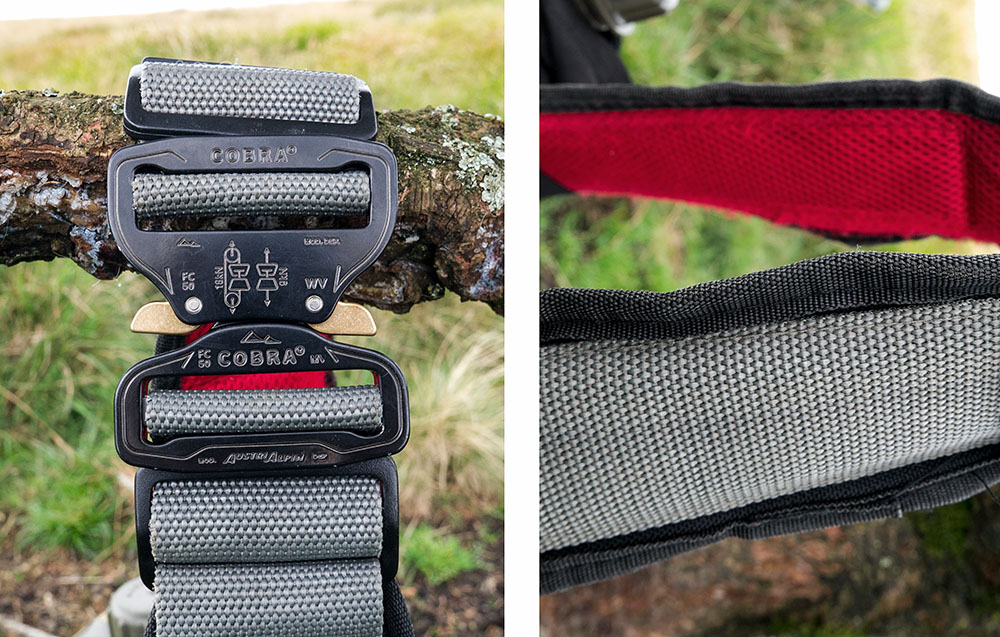 A match made in security belt heaven

Scramble's 4L Machine is an extremely tough, highly functional, 4 litre belt bag for padded belt setups. Based on the excellent but discontinued TAS pouch, we haven't strayed far from the original in designing an equally durable, yet more capacious and lighter-weight version for civilian use.

What we said about the TAS version is perhaps even more appropriate for the re-designed Machine: "In terms of functionality, it's near perfect [...] This is one of those items that does its job so well you never really notice it. In conclusion, a stalwart; and once used, an absolutely indispensable item".

Postscript: So, why a belt bag?

The benefits of a separate modular hip belt setup are: