Firstly, a very happy Christmas and a highly sociable and adventurous new year from all at Scramble.

In this post we're going to preview the upcoming Winter Kit Test 2023, provide some product, site and store updates, explain our decision to skip the 2022 kit tests and provide a brief, picture-book tour guide for the "Summer" Kit Test of 2021.

In the early days of Scramble, I used a decent Panasonic travel zoom which was petite, inexpensive, reasonably reliable and something I didn't have to care too much about. Going off-path, I seem to stumble and fall quite a bit and occasionally I'll crash through some moss into bog, so I never wanted anything too fancy and expensive. However, its lack of RAW support and the small sensor resulted, at least in difficult conditions, in a far from ideal output.

GP-Net Media suggested I switch to Micro Four Thirds (MFT) and offered me a supply of Panasonic GX1s and that's the camera I've been using ever since.  The VW Golf of cameras, it's solidly built, compact and reliable with excellent handling / ergonomics (made when the MFT duo of Panasonic and Olympus focused on smaller, lighter bodies and compact lenses).

Over time I'd become frustrated with my tripod (cheap, flexible, plastic, absolutely crap ball head and prone to breakdowns) and so I contacted my photography experts at GP-Net with a list of requirements for an ultralight all metal tripod and they went to work.

After much testing and back and forth, they've come up with a mini trekking tripod that's already making my life a lot easier and my photography hopefully a little better.  Here's how GP-Net sum it up:

"an all metal, ultralight yet highly durable modular tripod kit for extreme outdoor pursuits: a quick release, column and ball head for the Novoflex Micropod and other lightweight mini tripod bases"

The whole Scrambler Tripod story is outlined much better by GP-Net over at Studio, so for anyone interested in this kind of thing, check out their post on the Scrambler Ultralight Modular Tripod.

GP-Net have now released the Scrambler on their SYSTEM store.

Pictured below are the two cameras I now use for all Scramble images attached to the Scrambler tripod: the Panasonic GX1 (with the Panasonic 12-32mm, 24-64mm FF equivalent, pictured right) and the tiny Sony RX0 in a cage for when conditions get nasty (or I need to do a selfy as I'm drowning in a bog). 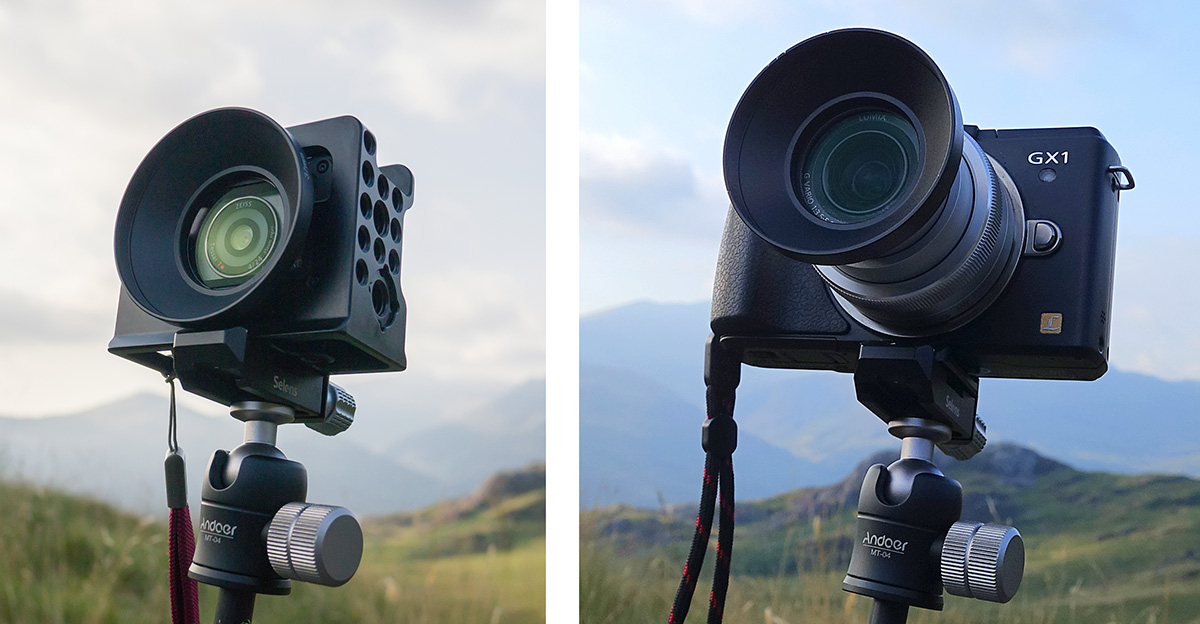 The beginning of 2022 was frustrating. Waiting for winter to arrive, but it never did.  I've spent the whole of 2022 in office mode; making connections with manufacturers and new suppliers, ordering from European suppliers who, post-Brexit, have worked out how to ship to the UK after decoding the bureaucratic mysteries that Brussels and the UK had invoked (proving that these bureau and technocrats either have never worked a single day in the real world or are utterly corrupt and waging war on small businesses.  My take?  It's likely a bit of both).

So, aside from small treks testing our tripod, from spring through to late autumn, I was desk-bound, receiving deliveries, working on future products and sourcing items from oversees. So we decided to make 2022 a review write-off and instead just released our findings from the 2021 Kit Tests.

The result of course is a necessary investment in the future and a backlog of gear to test.  So please accept our apologies for the lack of interesting reviews. 2023 should see us return to form and there's plenty of kit queued up for testing.  But before we get into that, let's look at one beneficiary from all this office work: our re-stocked store on SYSTEM.

Click on the image below to see all the re-stocked items....

It's always nice when a good deal of initial research pays off.  Many of the major items we tested in 2021 garnered reviews (either official or "special mentions").  The reviews are linked below:

We recently tested a knife that is well worth a quick mention. Due to its weight (100g), the QSP Piglet doesn't displace our current recommendation, the Ka-bar Dozier, however, if I was going away for a long time, I'd be very tempted to take the QSP as my primary knife and have the Dozier as a backup. It has a thicker blade stock than many in its class (3.7mm) which resolves to a fine point. The handle is rounded and very comfortable in my (size 8.5) hands.  The opening is silky smooth and can be opened and closed one-handed. In addition, the choice of Sandvik steel is excellent for a budget knife. We're no great experts on knives, so if you want to find out more, there's numerous YouTube videos on this knife and an excellent written review here.

The QSP Piglet is a great knife, sensibly priced, but a little heavy (100g) for general purposes.

Something of an impulse purchase that I expected to be rather useless and gimmicky, the Nebo Lumo actually got quite a bit of use and being so lightweight (25g including carabiner clip and 3x LR44 batteries) it's the kind of luxury that's easy to excuse slipping into your pack.

It provides 25 lumens in a dispersed glow.  Basically it's just enough light to see what's in your immediate vicinity (around your tent or tarp) without having to don your head-torch. Attached to a tarp pole, it's easy to locate in the dark and though it's nowhere near a must have item, it's not a waste of money either (and as an emergency, near-view, static hanging light, it's quite usable). What it won't do is light the way ahead. 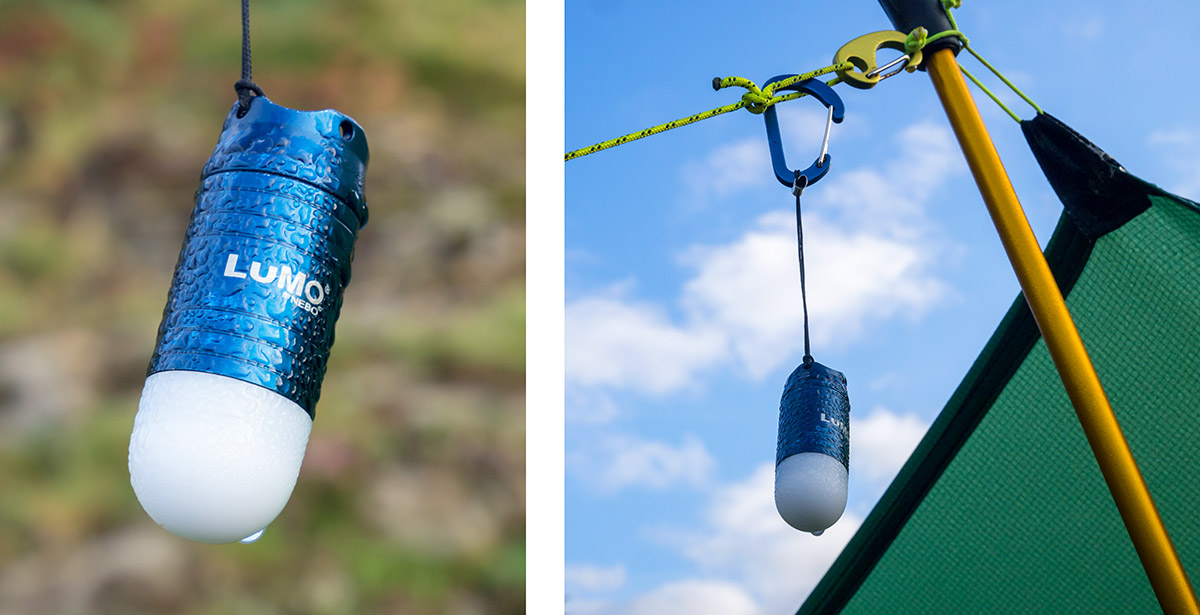 The Nebo Lumo may be non-essential porch lighting on a budget, but it's far from a gimmick.

We won't go into great depth regarding the Summer 2021 Kit Test (mid-August), except to say that for the first 10 days it was a distinctly Welsh summer; like everyone else's October or November.  Temperatures at the warmest time of day failed to reach 20℃. There was a consistent chilly wind and on most days, a considerable mist. I didn't get the feeling the planet was "burning up". This was my summer-wear for almost the entire trek.

Rather than focus on the gear, this time I thought I'd take you on a quick pictorial guided tour. The kit test started in Merthyr in South Wales and aimed for Cnicht (a pointy little mountain in Snowdonia in the north), taking in the Usk Reservoir, Elan Valley (the "Green Desert" west of the Claerwen Reservoir, pictured below), Machynlleth, Barmouth, the Rhinogs and Maentwrog.

No paths, no people.  This plateau in mid-Wales, leading up to the Claerwin Reservoir  offers tremendous, seemingly unending isolation and in more calamitous conditions, perhaps a sense of desolation. 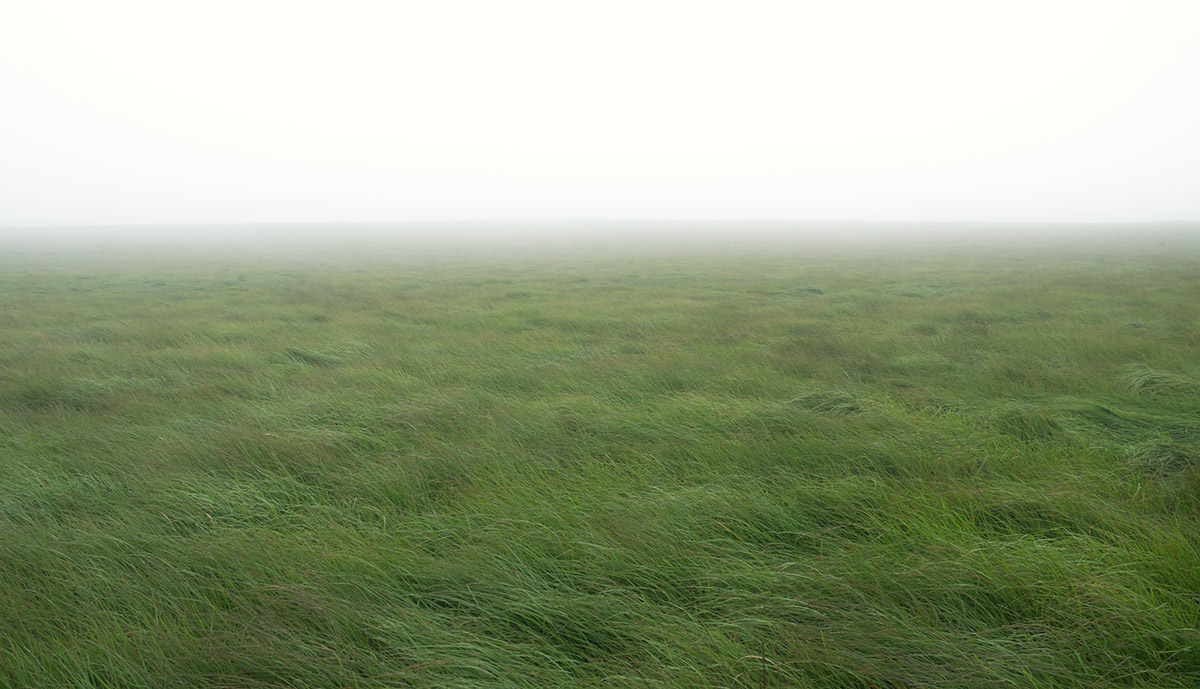 As you get closer to the reservoir a few more undulations and waterways appear and a sense you actually are somewhere, or at least getting somewhere. 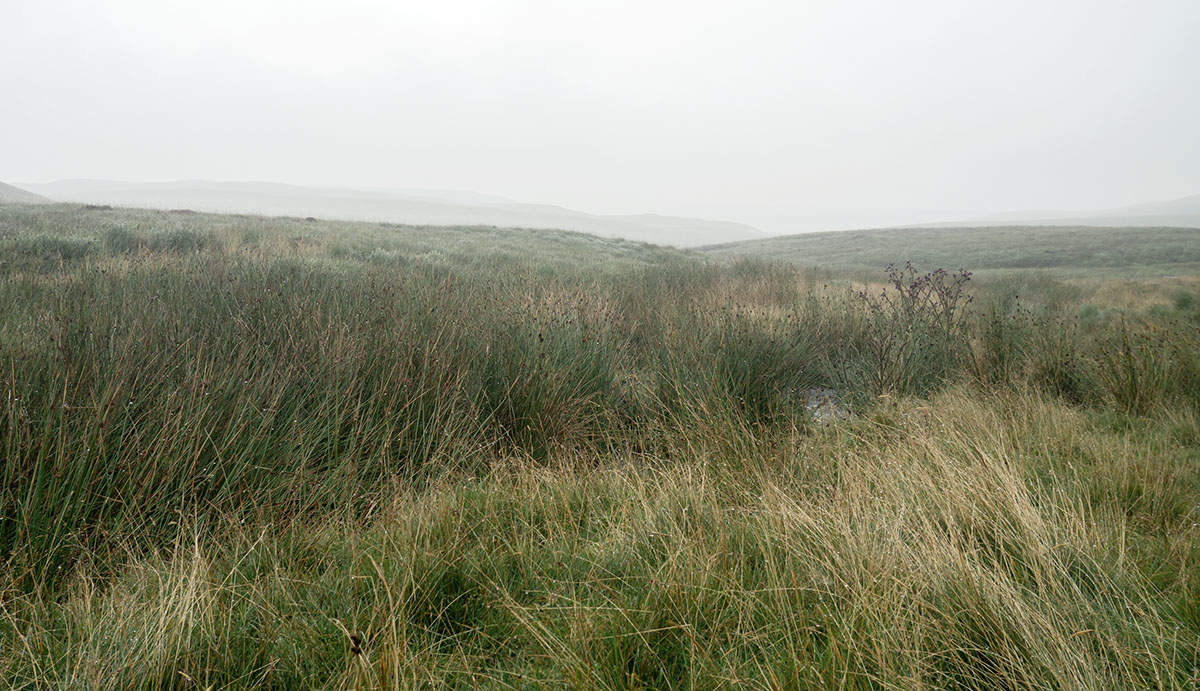 North of the west side of the reservoir, under-foot conditions improve and you can make quick progress.  Further ahead, some treacherous bogs await and you have to be somewhat tactical about how to connect the elevated sections. In poor conditions caution is warranted. 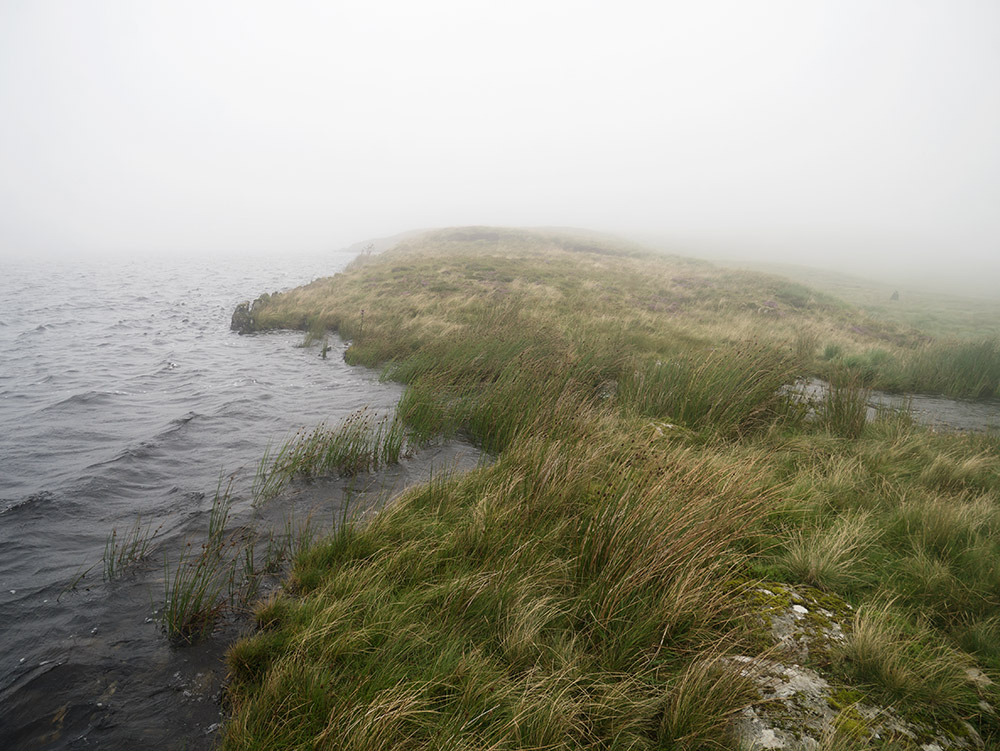 A dash due north, toward a climb and final descent off the plateau.

Exiting the plateau you come down and see, what on scorching summer days can look like ancient middle eastern ruins, but is instead the old Cwmystwyth Lead Mine. Over the ridge and heading NNW you hit a forest section. Speedy progress and more desolation in the ever-present mist. 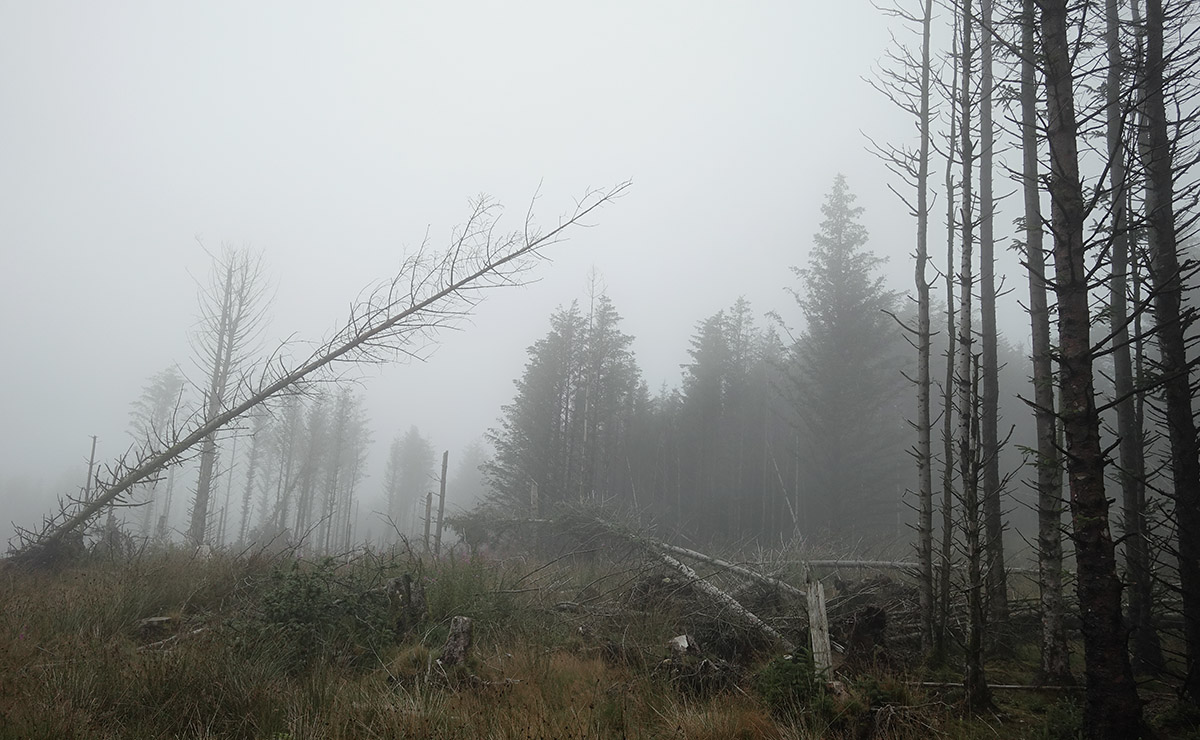 The forest section before Nant-Y-Moch.

Through the forest and exiting at a place called Dyffryn Castell gets you across the A44 and after "sheep in the mist", there's a little climb onto a speedy path running north along the east side of the Nant-Y-Moch reservoir. 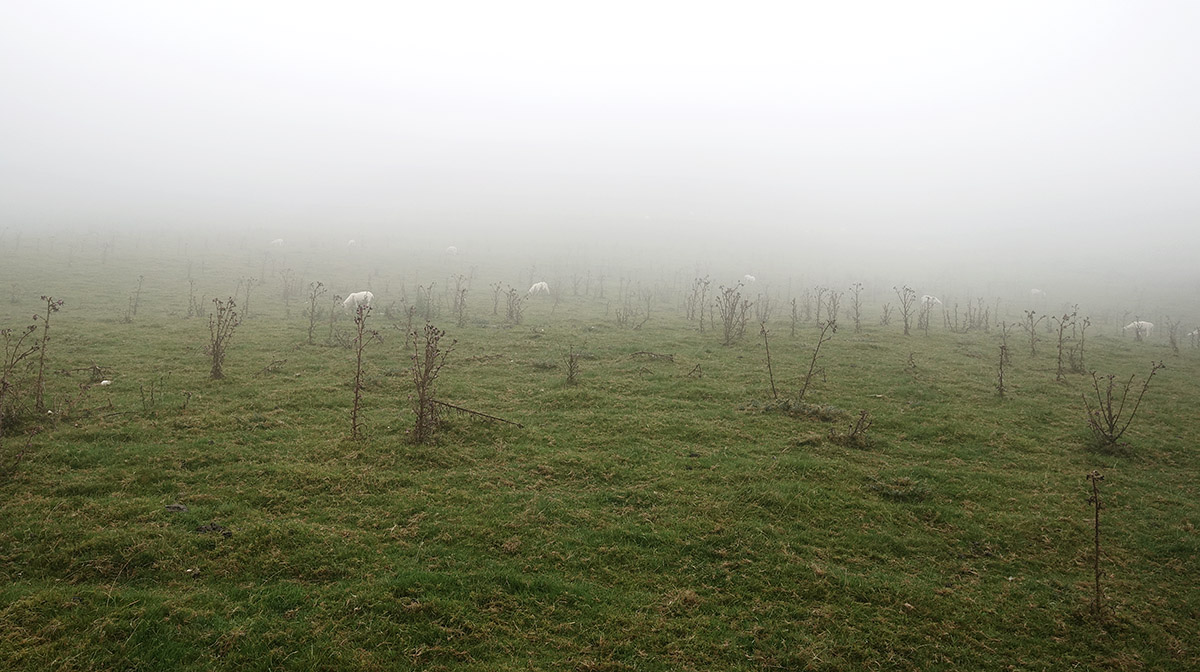 The bottom part of the climb up to the ridge overlooking the Nant-Y-Moch reservoir.

After the descent, there's a good deal of foresty crap to deal with before you get to the various paths, then roads, that lead to Machynlleth.

Heading due north out of Machynlleth you face a reasonably long trek through a mixed, mazy bag of steep forested slopes. Through the forest and over the ridge you descend passed an old slate quarry, which, to my untrained eye, resembles some kind of Japanese landscape.  A central column of flat cascading abundance framed by arching foreground vegetation. But what do I know? 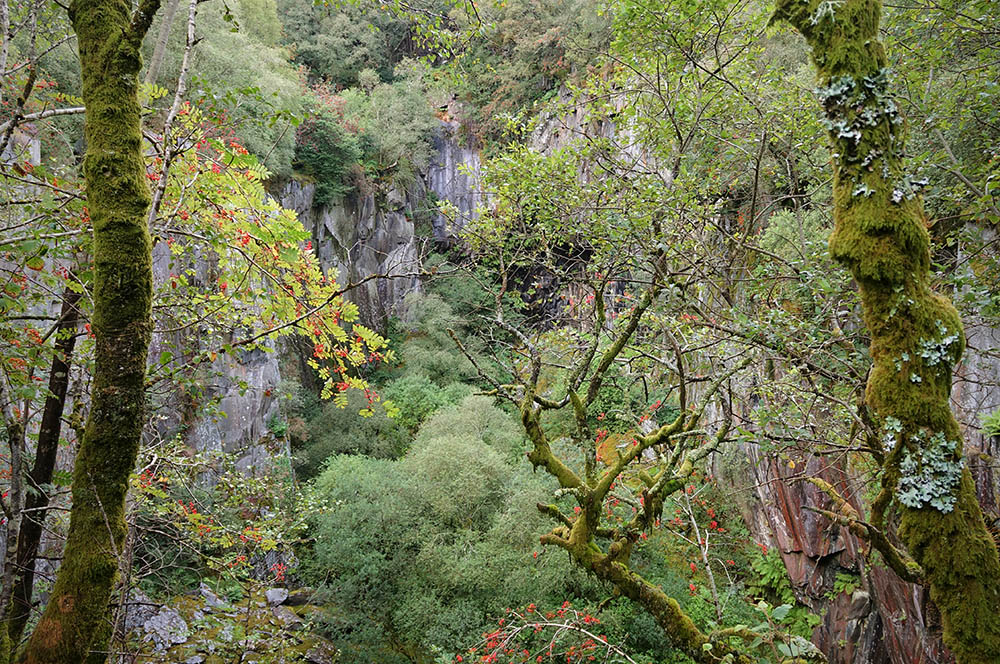 A slate quarry north of Machynlleth.

Across a flood plain and over another ridge and you begin the descent down to the rail and foot-bridge that crosses the estuary to Barmouth. I camped out on the slopes and here the weather began to improve. 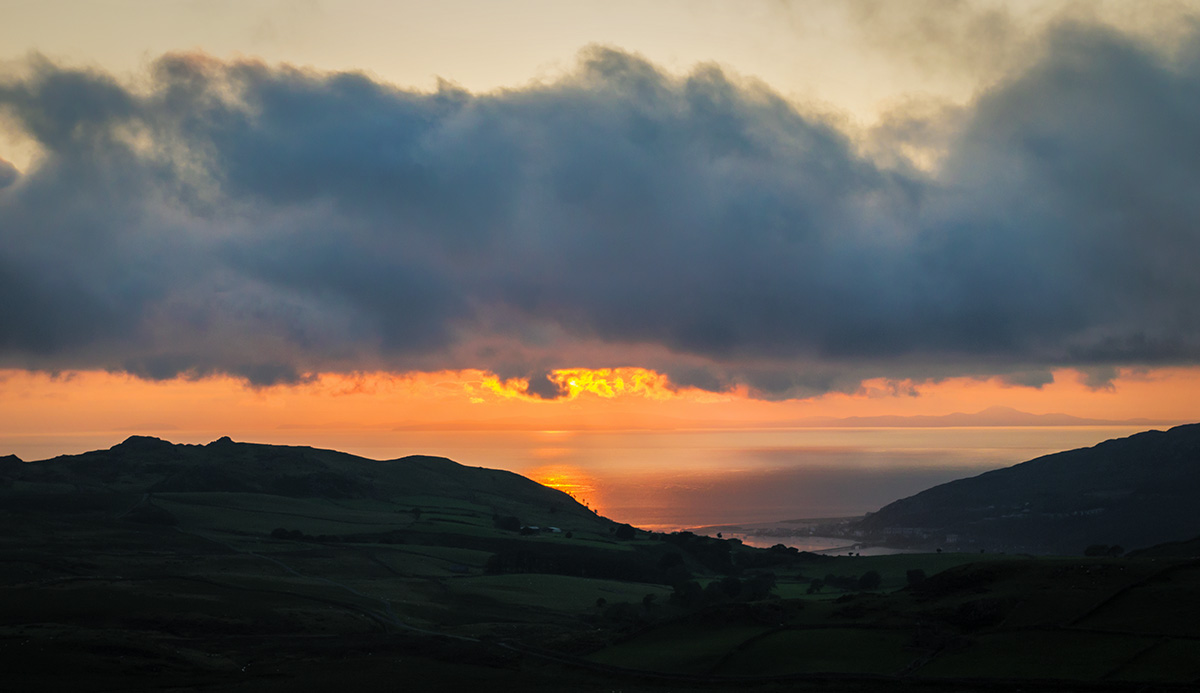 Sun sets at seven over Barmouth.

Over the Barmouth Slabs and across the Rhinogs with a few steep ups and downs you reach Maentwrog. NNW out of Maentwrog gets you near Croesor where a gorgeous sunset awaits. 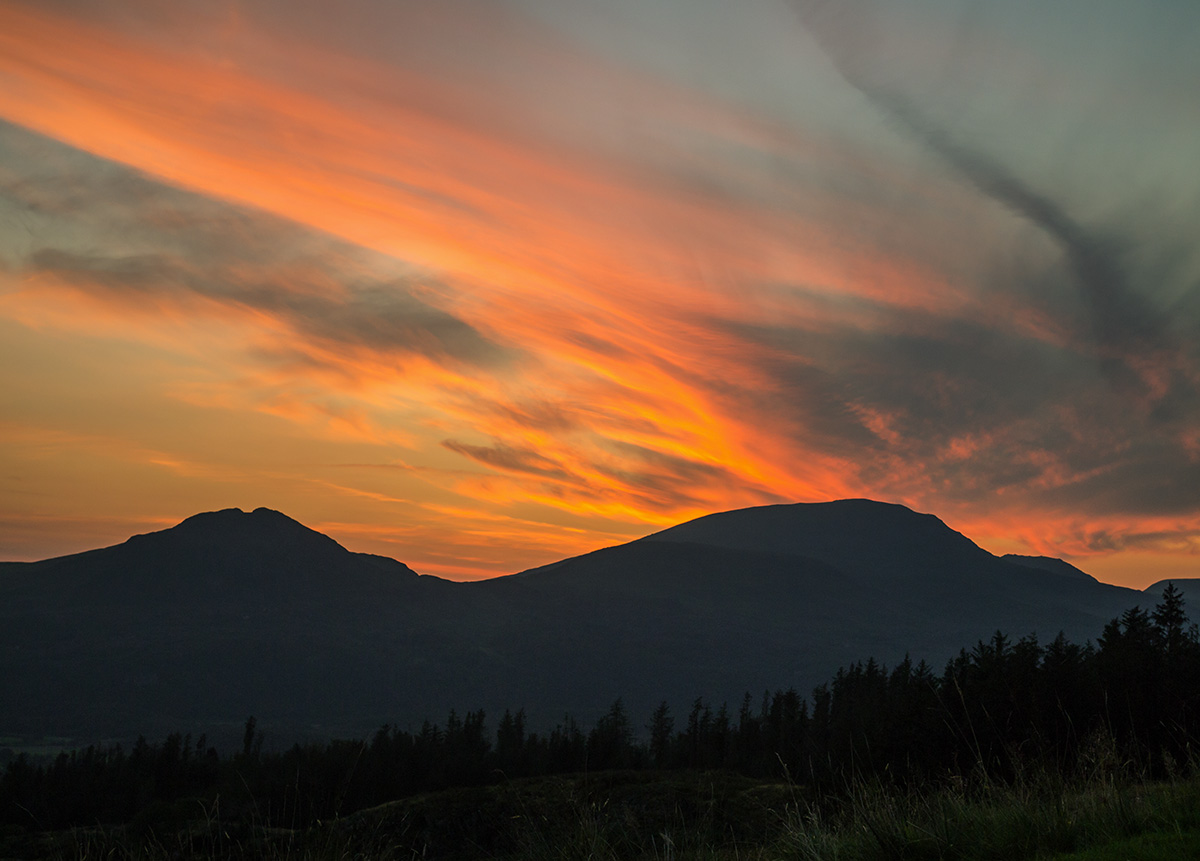 Heading NNW out of Maentwrog and the sun sets over Snowdonia's peaks.

Lose track of time taking photos and exit stage right to hunt in the dark for a dry slither of slope. Rise the next day to find yourself in a giant drainage basin catching the run-off from Moelwyn Mawr.

Keep going north and race to the top of Cnict. Job done.

Heading back to Maentwrog is a lake called Llyn Mair, which was eerily still as it self-consciously held its pose for this "photographer". 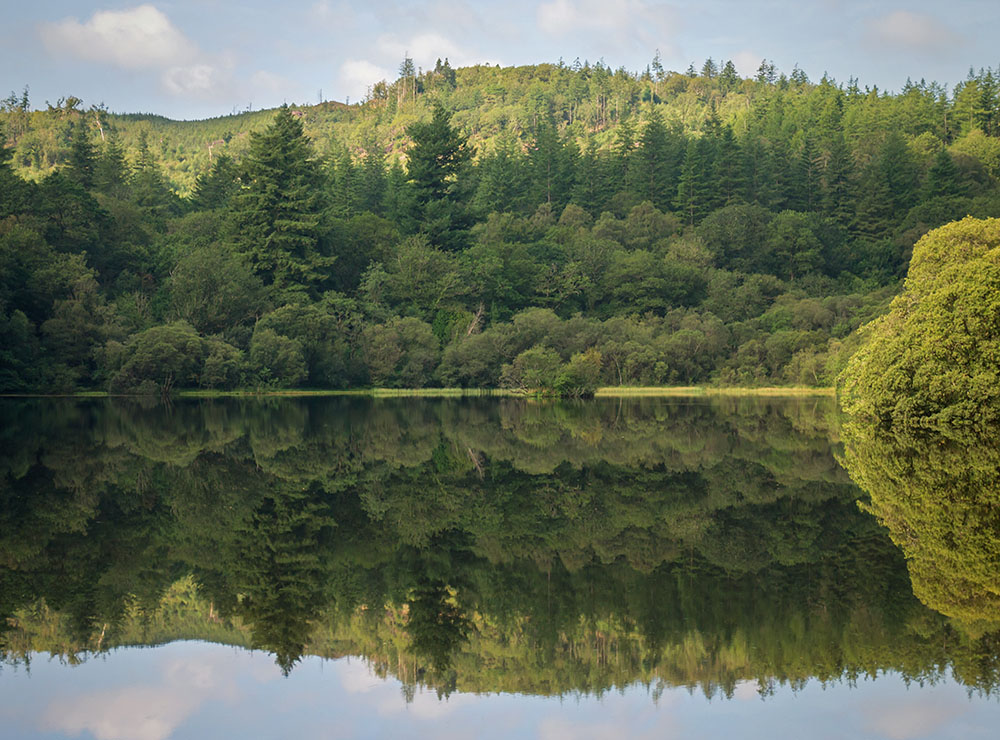 Back in Cardiff, surveying the damage, mostly caused by underfoot conditions in the mid-Wales section. Pretty superficial. 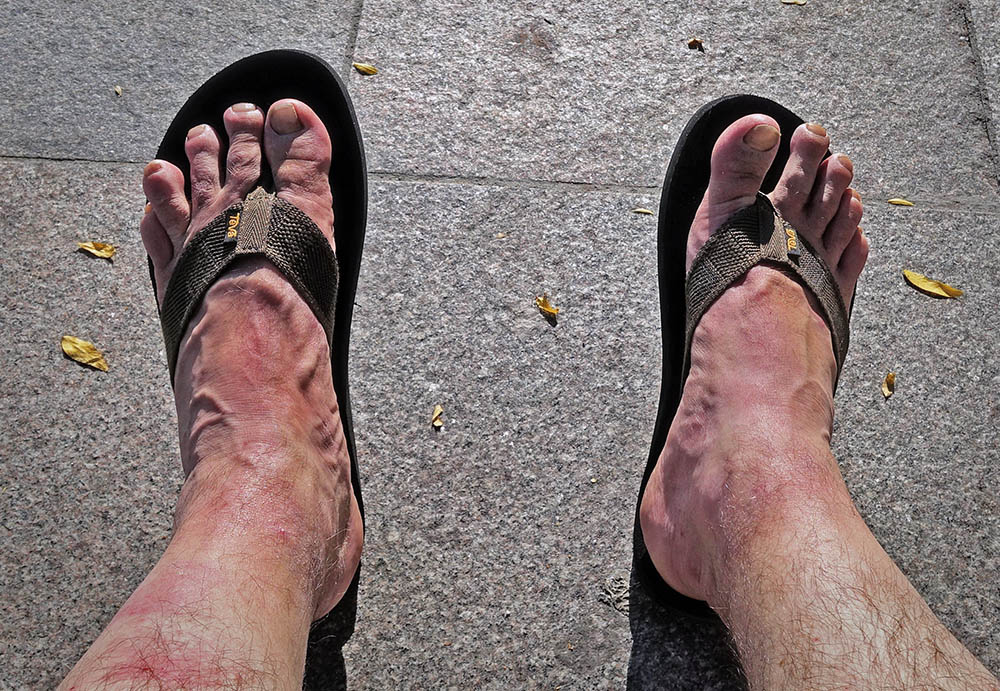 And of course. Scramble's editor is leaving Wales - let's switch on summer and godspeed. 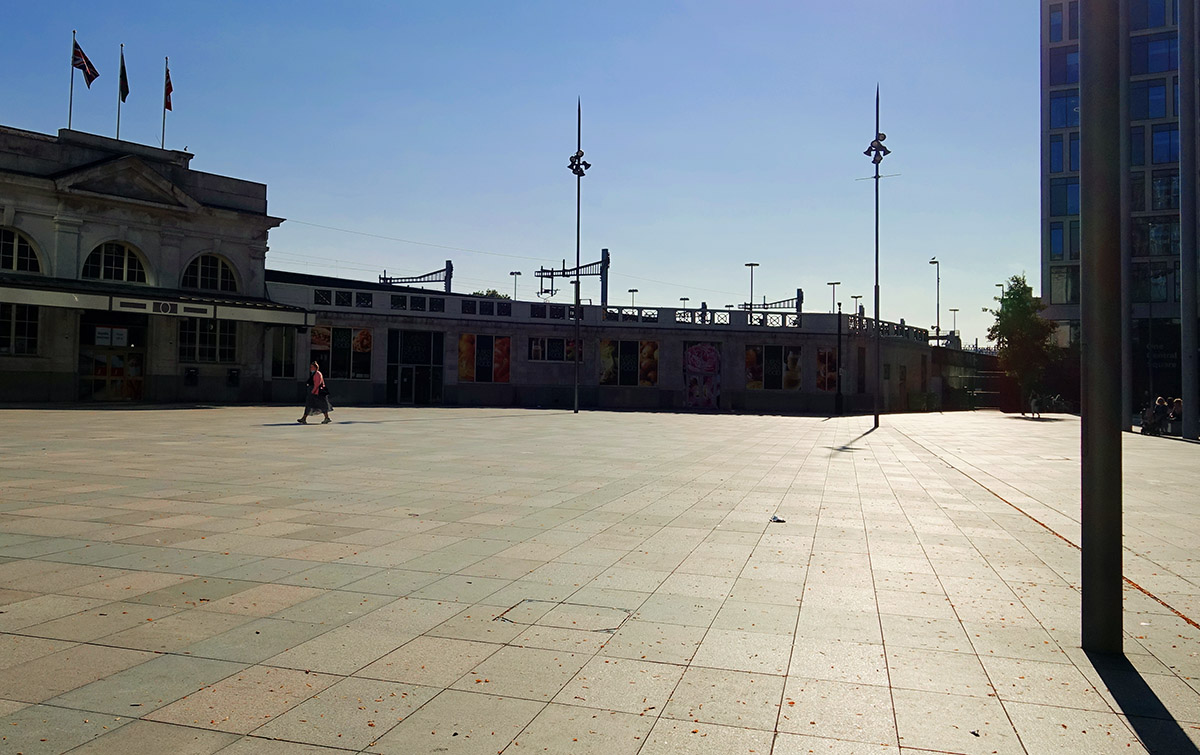